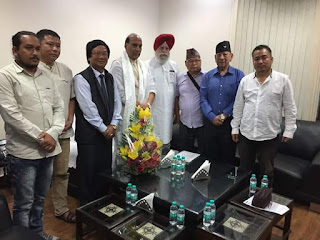 "GJM has been an alliance partner of BJP in NDA. In its manifesto for the last two general elections of 2009 and 2014, the BJP had stated that it will 'sympathetically examine and appropriately consider the long pending demand of Gorkhas and Adivasis'. We would therefore now appeal to you to take this assurance of the BJP forward through the Government by instituting an official committee to examine and appropriately consider the demand (of Gorkhaland)," read the letter by the GJM delegation to Singh.

"You are aware that you had been kind enough to issue a statement in September, 2017 assuring that talks would be held with GJM led by Bimal Gurung. Now that normalcy has been restored in Darjeeling, we are hoping that you would direct the Union Home Ministry to convene the talks at the earliest," the letter added.

In a press communique, Ahluwalia said Singh assured that a meeting will be convened soon.