Sanjay Pathak Kathua, August 26 Rifleman Nihal Gurung, who was martyred during a landmine blast near the Balbir Post in the Keran sector on Sunday, was cremated with full military honours at Gagrote village in Basohli sub-division of Kathua district.

Rifleman Gurung sustained critical injuries in the blast and was taken to a 92 Base Hospital in Srinagar where he succumbed to his injuries. Rifleman Gurung, 22, was the only son of his parents. He joined the Army in 2014. 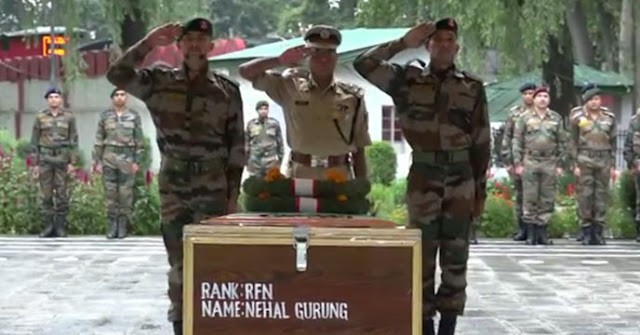 He was third generation soldier in his family. His father and grandfather had also served in the armed forces. While his father was with 2 Jammu and Kashmir Rifles and retired in 2004, his grandfather had retired as a subedar in 1983. His uncle Nirpat Gurung retired from the Army this year.

Rifleman Gurung was to get married next year.
Earlier, a pall of gloom descended on the Basohli sub-division as the news of his death spread. Thousands of people from all walks of life took part in Rifleman Gurung’s final journey and bid him a tearful adieu. People converged at his home in large numbers to mourn the loss of the braveheart.

Political leaders also attended the funeral possession, but no senior official of the district administration was present.

Army pays tributes to braveheart
Srinagar: The Army on Sunday paid a befitting tribute to late Rifleman Nehal Gurung who was martyred in the line of duty in the Keran sector of Kupwara district on Sunday. In a solemn ceremony at Badamibagh Cantonment, Chinar Corps commander Lt Gen AK Bhatt and all ranks paid homage to the soldier on behalf of a proud nation. Rifleman Gurung sustained fatal injuries during counter-infiltration duty in the Keran sector. “He was provided immediate first aid and evacuated to the 92 Base Hospital, but unfortunately he succumbed to his injuries,” an Army statement said.