Rs.172 - Price of blood, sweat and life of a Tea garden worker in Gorkhaland!

‘All wealth is the product of labor’- John Locke

Tea plantations of Darjeeling, Dooars and Terai encompass the two extremes of human existence, the unimaginable opulence of Tea garden owners and the abject impoverishment of workers. Behind the idyllic hills, the scenic gardens, the “romance of the two leaves and a bud”, and the “smiling faces” of the workers, what remains carefully hidden is the ugly truth of sub-human wages, more than a thousand starvation deaths, and seething anger. 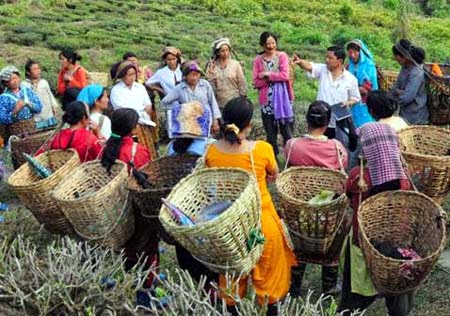 The ongoing wage negotiations for tea gardens in the Hills, Dooars & Terai has yet again brought to fore what the West Bengal government and the industry wishes to brush under the carpet. It is another manifestation of the complicity of the state in depriving the workers of their basic minimum level of sustenance. Darjeeling tea derived its value (even has its own Geographical Indication-GI mark) from its qualitative excellence and high exportability. Darjeeling, Dooars and Tarai produces one of finest and most sought after tea in the international market (Iran, Japan, UK, Russia, UAE). Such is the demand for Darjeeling tea that in the year 2016 the finest quality of Darjeeling tea was sold at Rs 1.12 lakh per kg. Tea industry makes valuable contribution to both Central and State Government coffers by way of different Central and State taxes. The West Bengal State enjoys approximately 1500 crores of revenue generated from tea gardens annually along with the revenue from tea tourism, forest, hydel project etc. However, the contributions of the tea garden workers have been rewarded by hardship, struggle, denial of basic rights, untimely medical facilities, forced lockdown of tea gardens and starvation deaths. This perennial appalling condition has compelled the workers of 273 tea gardens to hit the streets and raise their voice for higher wages. Examining the closest history, the wage of workers’ was Rs.45 per day in 2001, Rs. 90 per day in 2010 and Rs.95 per day in 2011. After repeated pressure from workers trade unions, it was increased to Rs 132.50 in 2016. In February 2018, the wage was decided upon as Rs 150/day. However, following the disagreements and protests from the tea gardens workers trade unions, the planters agreed to increase the wage only to Rs 172 per day on 5th August 2018, which the workers have out rightly rejected.

How low is the wage rate in tea gardens?
First, workers of Darjeeling, Dooars, Tarai and Assam are paid the lowest wage among all tea plantations located in India. Eg. Tamil Nadu pays Rs. 303, Karnataka pays Rs 317 while Kerala pays Rs. 600 per day. Ironically tea produced from these locations are not much demanded in international market and fetches low price, even then the tea garden owners are able to pay decent wages more than that of Darjeeling. Secondly, wages of tea garden workers of Darjeeling, Dooars and Tarai is even lower than the government mandated minimum wages in similar occupations in West Bengal. The recently proposed wage rate by the planters and state government for the tea garden workers of Darjeeling, Dooars and Terai is Rs 172, which is even lower than minimum wage paid in Cinchona plantation located in the same region (Rs. 211), in Beedi leaf plucking (Rs. 255), in Agriculture (Rs 278). Thirdly, the money wage was Rs 90 in 2010 and it was proposed to be hiked to Rs 172 on 5th August, 2018. However, if we take into account the rising living expenses (due to rising prices over time-inflation), the real wage (what money wage is able to buy in terms of goods and services) hike is miniscule in terms of purchasing power. For e.g. the goods and services, which could be purchased using Rs. 90 in 2010, will cost Rs.141 in 2018. Even Rs.90 in 2010 was the lowest wage received by workers among workers in other industries during that time. This implies that workers until last year (Rs 132.5 in 2017) were not even getting wage, which could buy same amount of goods they used to buy with Rs. 90 in 2010. Similarly, Rs 172 of 2018 will only buy the same amount of goods what workers could have bought with Rs.109 in 2010. This means that the wage hike proposed by planters is very low if we take into account the rising daily expenses of tea garden workers. Workers are demanding Rs 239.82 as minimum wage, which is just equal to the purchasing power of Rs 152 of 2010. The minimum wage of Rs 239.82 is not even 40% of minimum wage of tea garden workers in Kerala. In an era where LPG refilling costs around Rs 1000, the tea garden workers are bound to survive on a monthly average income of Rs 5000. Since, tea garden is the main source of income for the families, it is beyond impossible to maintain a decent livelihood with such a minimum wage leading intergenerational poverty trap. Contrary to this deplorable condition of workers, the CEO of a tea company (Goodricke Group Limited, Annual Report, 2017-18) has a salary scale of Rs. 4-7 lakhs per month with additional Rs. 50,000 special allowance per month.
What do various reports say? Nearly 1500 tea plantation workers of Dooars and Terai have died due to starvation in the last ten years. According to the state government’s Labour Department Survey (2013) report, nearly Rs 47 crore rupees of provident fund was unpaid to workers in 75 tea gardens in 2013. Around 80% of the gardens had no medical staff and most of the gardens had no access to basic health facilities. The International Labour Organisation in its 2005 report clearly states that the Tea Board, which is the regulating authority of the Tea Industry, has failed to fulfill its stipulated function. They have continuously ignored wage and provident fund defaults of tea gardens, while portraying this crisis only as a marketing mismanagement. The ILO report also suspects that there is collusion between the planters and the State, which is highlighted by the non-implementation of the Tea Act, 1953. Studies show that 70% of the people of the closed tea gardens suffer from chronic energy deficiency III stage. The scale of deprivation and dispossession of livelihoods is such that the workers are forced to languish till they die of hunger and malnutrition. The Supreme Court’s order (dated 06.08.10) categorically asked the Government of India to carry out its statutory duty under Tea Act 1953. This allows the central government to take over the management/control of sick tea gardens (under section 16 B/D/E of the Act) and take steps thereafter to ensure that the interest of the workers are well protected and dues are all paid in time but such clauses never get invoked to protect the interest of the workers. Such low wages and exploitative conditions have resulted in large migration of workers from the tea estate. Human trafficking is also very rampant in the region. A report of a joint study by Unicef, Save the Children and Burdwan University (in 2010) estimates around 3,500 minors alone were trafficked from 12 gardens of Dooars alone.

We reject the recent offers by the Planters and Government of abysmally low wage hike from Rs.150 to Rs. 172.
We demand: 1. Declare and implement decent Minimum Wage for tea Plantation workers equivalent to that of state of Kerala 2. Grant legal ownership of land rights to workers 3. Reopen closed and abandoned tea estates immediately 4. Casual labour in tea gardens should be regularised as soon as possible 5. Backlog of unpaid provident fund and gratuity should be cleared immediately. We salute and stand in solidarity with the uncompromising struggle of workers for their rightful demand. Any attempt to break the unity of the workers or dilute the demands or betray the struggle must be resisted at all cost.