Aruna Lama "Nightingale of the Hills"

Aruna Lama (Nepali: अरुणा लामा) 9 September 1945 – 4 February 1998) was one of the well-known singers of Nepali music. She is popularly known as "Nightingale of the Hills". She sang hundreds of Nepalisongs, including some for Nepali Film, and left an indelible mark as one of the best singers in Nepali music. 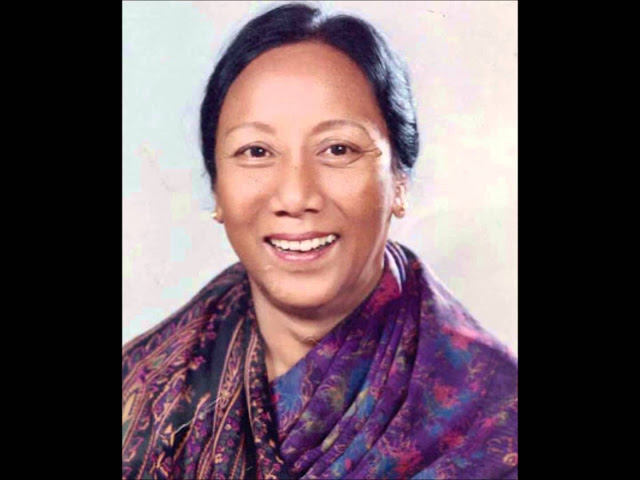 Aruna Lama was born on 9 September 1945 at Ghoom Pahar, Darjeeling, British India to Nepali parents Surya Bahadur Lama and Sanmaya Lama.[1] Her uncle C.B. Lama inspired her to sing from the age of 7. She won a music competition organized by the Gorkha Dukha Niwarak Sammelan (GDNS) in 1956 at the age of 11 and then she never looked back. Amber Gurung, one of the stalwarts of Nepali music, groomed her in singing from 1958. Aruna Lama did her schooling at Mungpoo Primary School, Jalpahar, and St. Teresa's School, Darjeeling. She completed her graduate degree in arts from Darjeeling Government College. In 1963, Aruna Lama married Saran Pradhan, another Nepali musician. In 1974, her husband died and she was left with her two children, Sapna (Pradhan) Thapa and Supreet Raj Pradhan. She worked hard to raise them, working as an assistant teacher in St. Alphonsus School (1965) and finally found work at the Scheduled Castes and Tribes Welfare Office in Darjeeling where she worked till 1998. She continued to sing even with all her struggles till the end of her life.