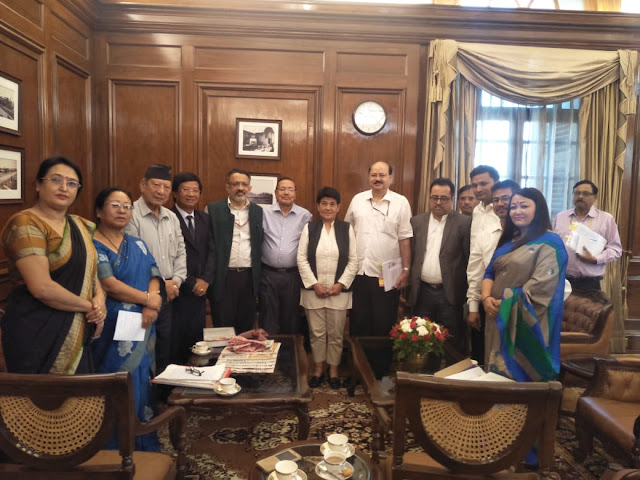 In a Press release, GJM has said the main points discussed were as follows:

1.   Need for finding a political solution to the long pending demands of Gorkhas and other people of Darjeeling, Kalimpong District, Terai and Dooars region at the earliest
2.  The semi-autonomous bodies, earlier the DGHC and now the GTA, were failures and that only a permanent political solution would answer to the perennial political problem in the region.
The delegation requested the home secretary that Government of India immediately commence a series of tripartite talks between the Government of India, Government of West Bengal and Gorkha Janmukti Morcha which will pave the way for finding a permanent solution to the long pending demand of the Gorkha people.
3.   Introduce a bill in the upcoming winter session of parliament for inclusion of the 11 Gorkha Tribes for ST status for the 11 left out Gorkha tribes – Bhujel, Gurung, Mangar, Newar, Jogi, Khas, Rai, Sunwar, Thami, Yakkha and Dhimal into the Schedule Tribes of India list.
4.   Constitute an Expert Committee to Study the Economic, Administrative and Political Viability of Gorkhaland State which will include the Darjeeling, Kalimpong, Terai and Dooars region
5.  Create a conducive atmosphere in Darjeeling region so that proper dialogue could begin.
6.   They said that an undeclared "police-raj" was imposed in Darjeeling, "where false and fabricated cases are/being slapped against anyone who is even remotely deemed of being supportive of the demand for Gorkhaland."
7.   Transfer of all cases of bomb-blasts and arms recovery to the NIA, and has also sought an investigative inquiry under the Centre into all deaths during the Gorkhaland agitation.

The union home secretary has inturn asserted that a fact finding team would be sent to Darjeeling and other places to look into charges of misuse of law and order machinary by the district administration and police.

The union home secretary further assured the GJM team that the home ministry would seek to hold a tripartite meeting after the Puja holidays. The meeting lasted for about a hour and was attended by other union home ministry officials.