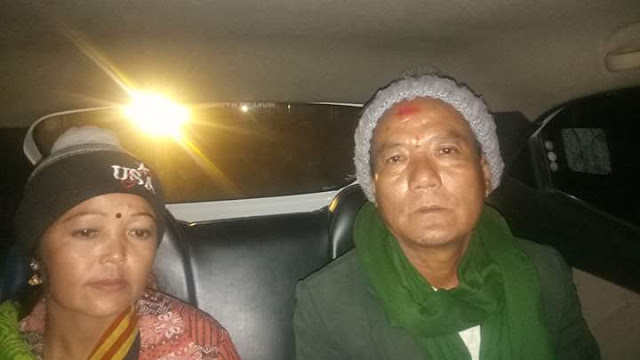 President of Assam Pradesh Bharatiya Gorkha Parisangh Advocate of Gauhati High Court services were sought at Jorhat and we could Free 23 Gorkha D' Voters from charges of being Foreigner in August last year after Mosti Maya Limbu was declared foreigner by the Foreigner Tribunal, Jorhat. This was a victory we couldnot celebrate as our own Cheli was languishing in Detention Camp for being a Gorkha's daughter born in India in 1981 to a parents who had voted in 1970 from Sarupathar constituency.

This particular case was handed over Upadhyay after another very senior advocate (name withheld) and his associate who was introduced to the victim's family through a relative failed to deliver justice. After pursuing the case for several months before the Honourable High Court, we finally could free Mosti Maya Limbu a day before 70th Republic Day.

I thank Nityananda Upadhyaya Sir for his community services and his legal knowledge and flow of informations that made it happen. A round of appluass to our colleagues in BhaGoP who are ready to file addendum petition in Hon'ble Supreme Court for its permanent solution so that no Gorkhas are marked D Voter and tried at Foreigners Tribunals. We await to see a petition to be filed by Assam Govt in Hon'ble High Court in this respect as we take our next step.

The Jorhat FT has more than 150 cases registered against Gorkhas and the numbers are increasing while whole of Assam it is estimated to be more than 2000. There are examples where higher courts have overturned FT's judgenents and declared victims as INDIANs.

The Gorkhas reposes its faith on World's largest democracy and its Judiciary to deliver Justice to the sons of the soil. We humbly appeal Election Commission of India to look into it constitutionally.

Bharatiya Gorkha Parisangh Official shall legally fight cases of D' Voters and those Pending at Foreigners Tribunal (PFT)s as and when brought to our notice.