BJP chief Amit Shah’s declaration in Alipurduar on 29 March that NRC will be implemented in West Bengal if BJP came to power has  ignited a debate about how NRC might impact people in Darjeeling hills. The debate has further intensified after Prime Minister Modi repeated his party chief’s statement during his public address in Jalpaiguri on 3 April. While doing so PM assured that the exercise will not harm the Gorkhas in any way. He however avoided saying if it would bring any benefits to the Gorkha. As expected TMC chief Mamta Banerjee took no time in countering the BJP leadership’s statements adding that NRC is a political ploy of BJP to cause dissensions in society and coupled with the Citizens Amendment Bill (CAB) 2016 the scheme makes their communal agenda clear. 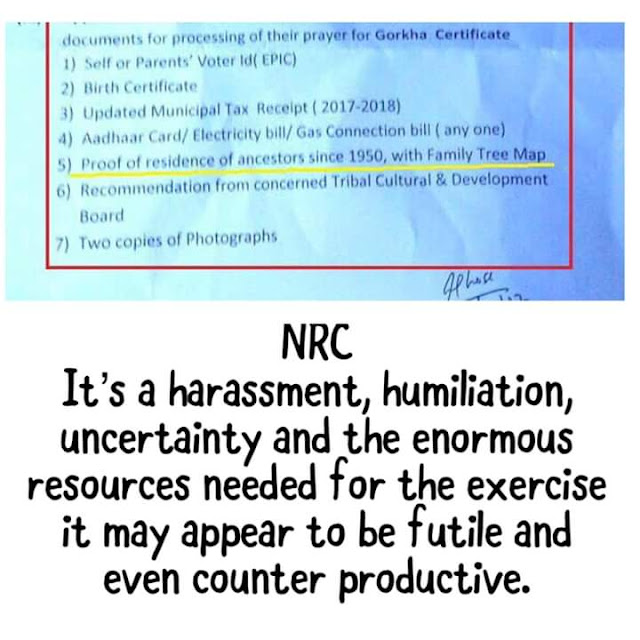 In an polarised political atmosphere combined with soon to be held elections debates often tend to be reduced to canvassing and propaganda  for or against the parties in the fray.  The debate on NRC sparked off by Amit Shah and Narendra Modi is no exception.

Preparation, establishment and maintenance of a ‘National Register of Indian Citizens’ (NRC) is provided for in The Citizenship (Registration of Citizens and Issuing of National Identity Cards) Rules originally framed in 1956 as last amended in July 2003. Rule 3(1) of these rules mandates the Registrar General of Citizens Registration ‘to establish and maintain NRC for the whole of India’, not selectively for any particular state or UT

Two questions arise; one, if NRC is mandated for the whole of India why do Amit Shah or Narenfra Modi single out West Bengal for its introduction repeatedly and second, Is the NRC capable of yielding results as per its stated objectives. For examining both these questions we will have to look to the ongoing exercise on NRC in Assam.

In spite of applicability of NRC all over the country Assam is the only state to have had it introduced way back in 1951. The reasons for this exception are in Assam’s  peculiar historical background. The state has had problem of immigrants ever since it was ceded to the  British colonial rulers by the Burmese rulers in 1826.  Alarm bells were rung for the first time in 1931 when CS Mullen Superintendent of Census reported about ‘invasion by hordes of land-hungry immigrants on Assam in the last 25 years that could destroy the whole structure of Assamese culture and civilisation’. The problem  persisted even after independence with an added dimension of national security after the partition of India. As a result an Assam specific legislation, Immigrants (Expulsion from Assam) Act 1950 was passed by the Parliament and Assam became the very first state of India to have an NRC in 1951 for identification and expulsion of illegal immigrants as per the Act.

The exception made in case of Assam because of compulsions of history and law does not take away the fundamental point that as per existing law NRC’s applicability is for the whole of India and singling out west Bengal in particular on election eve is legally and politically improper. We will examine possible reasons for this intimidatory singling out of West Bengal little later. First let us see what has been our experience of Assam NRC in terms of results achieved.

The main objective of  NRC was to identify illegal immigrants  and expel them. Barely ten years after the first NRC the 1961 census found number of illegal immigrants in Assam  to be nearly 2.25 lakhs. In a white paper issued by the Home department of Assam the estimate shot up to five lakhs. In the draft NRC published under the ongoing updation currently underway nearly four millions claimants to citizenship have been excluded for want of certainty about their citizenship status. It is obvious NRC has not contained the influx of illegal migrants in the State even after six decades of its introduction in 1951.

Let us look at the other objective of expulsion of illegal migrants after they are identified as such following the NRC. In  February this year during the  hearing of current status of Assam NRC updation government of India submitted before the apex court that out of 52000 individuals identified as foreigners by the Tribunal set up under Foreigners Act of 1946 only 162 were deported. This is an irrefutable proof of the failure of NRC in curbing infiltration or expelling infiltrators. Interestingly it was also submitted by the government before the court that 27000 individuals attempting to cross over from the border into Assam were pushed back by our security forces. Quite obviously a vigorous security setup to guard the borders against infiltration is more effective than an elaborate and time and resource consuming exercise of NRC that till now has hardly resulted in anything but discord and disaffection in society and harassment and humiliation of our own citizens.

These being the results why the idea of NRC is being marketed so aggressively by BJP for Bengal? Obviously the motive appears political. When you see NRC in conjunction with BJP’s another brainchild the Citizenship Amendment Bill (CAB) 2016 the motive becomes crystal clear. CAB divides illegal immigrants into infiltrators liable to be expelled and refugees likely to be granted citizenship depending upon the faith they practise. Thus by combining the two BJP may expect to neutralise anti BJP vote of those liable to be expelled and  consolidate its hold on those likely to be granted citizenship. People in Assam and other North Eastern states see CAB as a counter measure to nullify the objectives of NRC and have risen in protest against what they term  BJP’s   duplicity.

How will NRC if introduced in Bengal impact people in Darjeeling region? We have PM  Modi simply saying this won’t harm the Gorkhas but choosing not to say that it would benefit them. Then we have Raju Bista saying NRC will benefit the Gorkha by making them more secure in their land without explaining how exactly. At the cutting edge level we have  BJP supporters canvassing relentlessly that if NRC comes ‘90% of the Bengali speaking people in terai and duars will be pushed back to Bangladesh’. I am not aware how they are sure of their figures or the end result. However they seem unaware of the perilous procedure fraught with long spells of harassment, humiliation and uncertainty for the common man irrespective of who is pushed back to another country and who is entitled to remain in the end. They are also unaware that if CAB comes - and it is sure to come if NRC comes, both being dependent on BJP’s return to power - then many among those our friends are expecting to be pushed back to Bangladesh may end up getting citizenship due to the faith they practise. Obviously the painstaking propaganda by some of our youngsters is either a command performance or due to ignorance about the procedure involved. My advise to them is to go through the Citizenship (Registration of citizens and issuing of National Identity cards) Rules of 1956 and their 22 amendments, the last one being of 7 July 2003 and be unbiased in their views.

It is true that no Gorkha can be liable for expulsion from India irrespective of whether or not there is NRC in Bengal. Even those who may be deemed to be citizens of Nepal and not India can remain under the Indo-Nepal treaty of 1950. To that extent the PM is right that NRC will not harm the Gorkhas but there is no additional benefit that it brings to the table for Gorkhas which the Gorkhas don’t have already. When you think of this status quo with or without NRC and take into account the harassment, humiliation, uncertainty and the enormous resources needed for the exercise it may appear to be futile and even counter productive. In Assam where just an updation exercise for an existing NRC is going on nearly 40000 workers (30000 regular government  employees and 10000 contract workers) are engaged in the task. Twenty different types of customised computer soft wares have been developed mostly through private sector at huge cost and over 2500 data digitisation hubs established for the purpose. Diversion of such huge resources for an exercise at the end of which you are getting ready with another law to grant citizenship to many who may be found to be illegal immigrants or if you are able to deport only 162 illegals out of 52000 identified definitely needs to be given a fresh look. If your motives are purely political for which you couldn’t care less for the resources or  the harassment common people are subjected to during the exercise then it is a different story.

I am not for a moment arguing that we need not have NRC and let India be a caravan serai for immigrants. What I am saying is do not use NRC as an electoral gimmick and if you have NRC at huge cost to the nation do not neutralise its gains by a counter statute like the CAB. My argument is also to see if the objectives of NRC could be fulfilled by having a robust border guarding system instead of the cumbersome and frightfully expensive procedures involved in NRC that also become unduly bothersome for the common man. My appeal to every one is not to mix up a legal issue that also has bearing on national security with petty politics and unfounded or exaggerated claims about its gains or pitfalls.