Nepali language as one of the most takers during CBSE

In the recently concluded CBSE board examinations, Punjabi, Malayalam and Tamil were the regional language papers with the most number of candidates in class X. 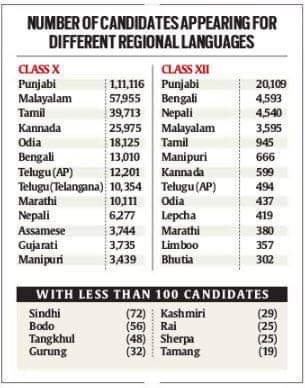 In class XII, the highest number of candidates appeared for Punjabi and Bengali papers, with Nepali coming in third.

The board offers 38 languages at the class XII level, and 34 at the class X level. These include Hindi, English and Urdu, along with a range of regional and some foreign languages.