While opposing implementation of National Register of Citizens in the state of West Bengal, political analyst and TMC supporter Tanvi Das ended up terming the Gorkhas as ‘infiltrators’ during a panel discussion on a TV channel.
While addressing a rally in Kolkata on October 1, Home Minister Amit Shah had said that the government will implement NRC in West Bengal. He had said that before implementing NRC, the centre will pass the Citizenship Amendment Bill first so that people who should get Indian Citizenship will get it. Amit Shah had alleged that Mamata Banerjee is spreading a lie that millions of Hindus will have to leave West Bengal if NRC is implemented. He said that people of Bengal were misled on NRC, and he wanted to clarify and clear all doubts. 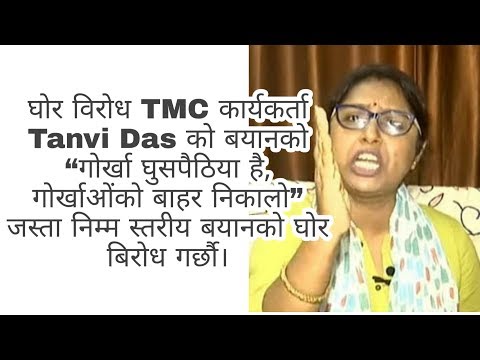 In the backdrop of Amit Shah’s remarks, News channel TV9 Bharatvarsh had hosted a panel discussion on the issue on 1stOctober. Political anylist Tanvi Das present in the panel on behalf of TMC, who rejected the claims made by Amit Shah and strongly opposed the NRC in Bengal.
During the heated debate on NRC and CAB, Tanvi Das made a shocking statement saying that Gorkhas are also illegal infiltrators, and questioned BJP spokesperson R P Singh for supporting the Gorkhas. “Gorkhas are also illegal infiltrators. Deport the Gorkhas, why are you supporting the Gorkhaland”, the TMC supporter said during the debate. She said that Gorkhas entered India by crossing the border illegally.
It is interesting to note that nobody in the panel reacted to the Tanvi’s comment, as they were involved in a heated argument over NRC, and probably didn’t hear what she was saying. The anchor Samir Abbas also didn’t react to the same.
The comment of Tanvi Das is totally wrong, because Gorkhas are not illegal immigrants in India. Gorkhas are living in several states of India for several decades, before the independence of India. They are known as India Gorkhas, as opposed to Nepalese Gorkhas, and after the independence of India, they were granted citizenship by a gazette notification of government of India.
Moreover, even the Gorkhas that entered India after that can’t be deported as they are protected by the Indo-Nepal Treaty of Peace and Friendship signed in 1950. This treaty provides citizens of one country same privileges in terms of residence, property, trade and commerce, movement etc in the other country on a reciprocal basis.