Home > West Bengal > Condemn the attempt by D.T.A & C.C.P.A to operate the Tea plantations in Darjeeling

Condemn the attempt by D.T.A & C.C.P.A to operate the Tea plantations in Darjeeling

Shut Down Plantations and Pay Wages to the Workers.

Darjeeling Tea Association and Consultative Committee of Plantation Association has turned deplorable and inhuman by shamelessly requesting the West Bengal State Government to allow the complete operation of Tea Plantations in Darjeeling as reported in the Statesman on 27th March 2020. 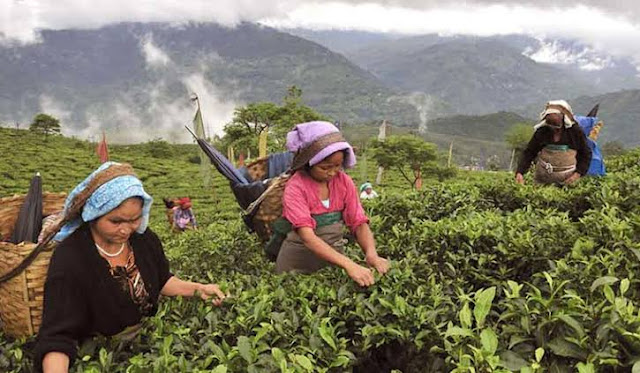 How indifferent, insensitive and self- centered can the Plantation Owners/ Company Heads get under this dire threat to the entire human species? Are the members of the D.T.A. and the C.C.P.A – “uneducated”, “illiterate” and so “ignoble” (often phrased as reasons for avoiding quarantines) that they do not understand the seriousness of the pandemic at hand? Then how’s it possible they have a stomach to appeal in such a mean spirited and draconian move to make tea labourers work under present circumstances. Is the common consensus within the D.T.A. and C.C.P.A an absolutely unscientific and superstitious hope and belief that tea workers of Darjeeling would exclusively remain immune to the novel Coronavirus? Or are they of the opinion that the life of our fellow brothers and sisters is so cheap that they can be readily disposed for the sake of a few crores petty profit? Isn’t this move of the D.T.A. and C.C.P.A consolidating the belief that tea plantation workers are merely slaves?

Therefore, in complete solidarity with the workers and their vulnerabilities during this time, we condemn this inhuman, insensitive and draconian move by the D.T.A & C.C.P.A for appealing the State Government to operate the plantations in Darjeeling.
We are confounded to observe that the State Government actually appears willing to deliberate on this request and may even consider it. In a situation where this very government has ordered a complete lockdown throughout the state, how can it even think of taking a contradictory position on the fate of thousands of workers and their dependent families? Especially, when working in the fields and factories entails gathering and socialising in a way that cannot be substantially avoided (which the workers are very much aware of) regardless of the D.T.A & C.C.P.A proposed precautionary measures such as “strict safety and hygiene guidelines”. However, under the same circumstances, in the neighbouring state of Assam, their state government has ordered a complete lockdown of the tea industry vide notification no. L.E. 16/ 2018/ 4035-98 dated Guwahati, 21st March 2020. The plantation owners there have complied to not only shut down the industry but also to cooperate with the government order that states categorically- “not to terminate employment or reduce wages” of any worker whether permanent or contractual and to consider them to be on paid leave. When such a socially relevant decision can be taken by Assam what bothers and stops the West Bengal Government to toe a similar line? What’s so special about Darjeeling that its workers don’t deserve a right to life and safety? It would be utterly draconian if the state government grants the requests of the D.T.A. & C.C.P.A. and we stand firmly against any such move by the government to endanger the workers’ lives.

Moreover, it is imperative now to ask few extremely crucial questions to all administrative and political bodies immediately concerned with the region regarding their positions on the latest move by the D.T.A& C.C.P.A. First, what is the local administration i.e. the Gorkhaland Territorial Administration(G.T.A.) and political representatives like the M.P & M.L.A(s)of Darjeeling going to do to reconcile this division of interests between the Plantation Owners (DTA & CCPA) and that of the workers? Second, what are the positions being opted, perhaps now, if they are truly concerned, by all the local parties proliferating on the soil of the hills? If they cannot be nonchalant to this move by the D.T.A& C.C.P.A to bereave workers from their right to life and security, our best suggestion to all parties is to shut down their clientele based politics and disband their organisations.

Third, our political representatives, especially the M.P. has so far been busy tweeting future plans for the region while the present move by the D.T.A & C.C.P.A is left conspicuously unaddressed by him. Then, what is RajuBista (M.P. Darjeeling) doing at the moment to tackle this new found situation? Whereas, the three MLA’s from Darjeeling hills, who are nowhere to be heard right now, what are they doing about D.T.A & C.C.P.A’s inhuman move to push the workers to risk and endangerment? Shall the State Government, the M.L.As, the M.Pas well as the G.T.A remain a mere onlooker without a voice during such an attack by the plantation owners on the right to life and security of the workers?All of their silences would make any one ask whether the Government, the MLA(s) and the M.P of the region were rather elected by a minority i.e. the handful of lobbying planters. It raises doubt as to who these political representatives from the region are really accountable to? Why haven’t they been able to utter a single word against such an inhuman and deplorable attempt by the D.T.A& C.C.P.A to open and operate tea plantations?

While the whole world is gearing towards international solidarity to fight a global pandemic as it has become impossible for any country to fight it alone. Darjeeling’s manypetty minded planters/ owners are lobbying through D.T.A & C.C.P.A for their parochial interests. To the extent of risking a major section of the Gorkha- Adivasi population who are prominently tea plantation labourers. Their deplorable and inhuman appeal is nothing else but the manifestation of their crude and cruel vision to exploit the workers. Instead of the relieving the labourers fromwork, so they too may stay in house quarantines, by providing them wages in advance, ration and other basic amenities to protect themselves, the D.T.A& C.C.P.A has shown their true oppressive and exploitative character. We thoroughly condemn every word and intention of their attempt to operate Tea Plantations in Darjeeling and stand in complete solidarity with the Workers in such trying times. Hence we demand the State Government to rather ensure that the tea plantation owners' must pay the workers their full wages in advance during the entire lockdown period.

Only way to fight corona in Darjeeling- Shut down the Tea Plantations!