Home > social > Racism in the time of Corona!

Racism in the time of Corona!

Racism in the time of Corona!
Nothing can be an excuse to be Racist!

As the pandemic of Corona virus is spreading throughout the world, it is not only spreading fear but also bringing forth the worst face of Racism across the world. The Asian communities residing in Europe and US are facing constant hostility and racial abuses on account of spread of Corona. So is the case with India. As reported in some social media and published in the Indian Express yesterday, some female students from Darjeeling and Sikkim were racially abused and discriminated in many parts of Kolkata. A person racially abused some students calling them ‘Corona’. Even when confronted for his racist remarks, the person seems out rightly unapologetic about his wrong doing. A student shared his experience saying that people refused to sit near him, even when the public transportation was crowded. Since the news about spread of Corona from China to rest of the world, people with Mongoloid features (from North East states, Darjeeling, Ladakh etc) have been target of racial abuse in many parts of country. Though people with Mongoloid features in India face racism in everyday lives and is not a new thing for us but to face such discrimination and abuses at a time of major health crisis is truly disgusting and deplorable. We express our unconditional solidarity with the aggrieved students and vehemently condemn this racist act in strongest possible words. We demand immediate strong legal action against such racists under appropriate provisions of IPC. The larger society should also deeply introspect on their discriminatory, irrational and inhuman practice of Racism. 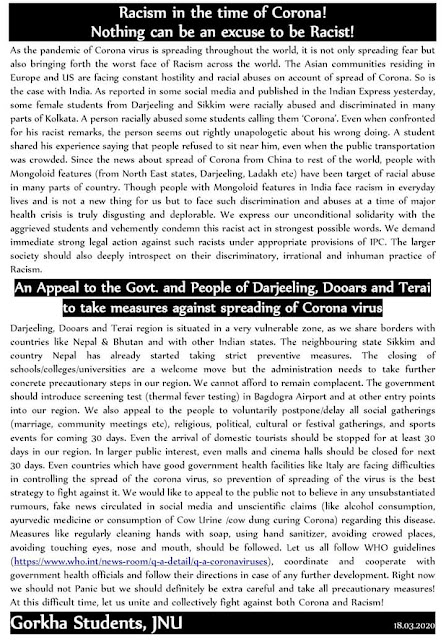 An Appeal to the Govt. and People of Darjeeling, Dooars and Terai to take measures against spreading of Corona virus

Darjeeling, Dooars and Terai region is situated in a very vulnerable zone, as we share borders with countries like Nepal & Bhutan and with other Indian states. The neighbouring state Sikkim and country Nepal has already started taking strict preventive measures. The closing of schools/colleges/universities are a welcome move but the administration needs to take further concrete precautionary steps in our region. We cannot afford to remain complacent. The government should introduce screening test (thermal fever testing) in Bagdogra Airport and at other entry points into our region. We also appeal to the people to voluntarily postpone/delay all social gatherings (marriage, community meetings etc), religious, political, cultural or festival gatherings, and sports events for coming 30 days. Even the arrival of domestic tourists should be stopped for at least 30 days in our region. In larger public interest, even malls and cinema halls should be closed for next 30 days. Even countries which have good government health facilities like Italy are facing difficulties in controlling the spread of the corona virus, so prevention of spreading of the virus is the best strategy to fight against it. We would like to appeal to the public not to believe in any unsubstantiated rumours, fake news circulated in social media and unscientific claims (like alcohol consumption, ayurvedic medicine or consumption of Cow Urine /cow dung curing Corona) regarding this disease. Measures like regularly cleaning hands with soap, using hand sanitizer, avoiding crowed places, avoiding touching eyes, nose and mouth, should be followed. Let us all follow WHO guidelines (https://www.who.int/news-room/q-a-detail/q-a-coronaviruses), coordinate and cooperate with government health officials and follow their directions in case of any further development. Right now we should not Panic but we should definitely be extra careful and take all precautionary measures!

At this difficult time, let us unite and collectively fight against both Corona and Racism!