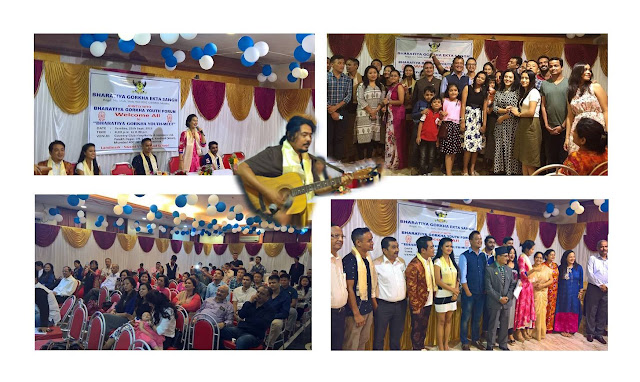 Annual General Meeting of Bharatiya Gorkha Ekta Sangh, ( BGES) held on 14th June, 2015 in Andheri Recreation Club, Andheri West Mumbai.
The meeting was attended by all the Managing Committee Members, Members of the Sangh and many enthusiastic Gorkha Youths of Mumbai. The Venue was arranged by Mr. Lalit Dutraj (Retd), ACP, Mumbai Police one of the founding members of BGES.

The AGM was attended by Prof. Jagdish Thapa, probably the first Gorkha to Graduate in 1958, with Master Degree from Premium Institute of India, IIT Kharagpur & Powai. Prof. Thapa was felicitated by Mr. Lalit Dutraj. Mr. Dhruva Pradhan, the Chairman of BGES presided the meeting.

Mr. P. Shasankar, Vice President of BGES read out the minutes of last year’s AGM. In pursuance to objective of Social & Welfare Scheme of the Sangh, the Chairman informed about the accommodation problems faced by Gorkha Cancer Patients and proposed to make an arrangement of accommodation for them by renting a place. He has appealed all the Gorkha to come forward and support him in this cause.

Mrs. Poonam Lama, General Secretary gave the details of sixteen activities carried out by BGES in last year, some of which are as follows;

• Workshop for Gorkha youth of Mumbai (GYOM) to know and connect with other Gorkhas in Mumbai.
• Football match of GYOM.
• Medical and blood donation Camp in association with MGM Hospital Vashi.
• ‘Run for Jyotika’ to raise fund for the treatment of Late Jyotika’s cancer.
• Sending relief materials to Nepal in association with Giants Group, Rotary Club, Siddhivinayak Logistic Ltd and many other organisation of Mumbai.
• Organized “GORKHA SOCIAL MEET” in Mira Road, with “Preeti Bhoj”

Mr. P. Shasankar, who is the Administrative Head in MGM Hospital Vashi informed that underprivileged Gorkhas will get medical support in his hospital and also he has managed to RESERVE SOME QUOTA for Gorkha students in MGM Nursing College.

For any query regarding the same one can write email to bharatiyagorkha2002@gmail.com

BGES also felicitated some achievers, who were present in the AGM. Miss. Roshni Rai, the marathon runner hosted the felicitation program [to know who were felicitated click on the pics]

After the felicitation, under open interaction program floor was opened for all to share the experiences. Mr. Kesav Sapkota, Mr. Passang Goley , Mr. Seetam Thakuri & Tapan Naubagh shared their experience and volunteered to take part in activities of BGES to serve the cause of Gorkha community.

Despite Mumbai Rain, more than sixty committed Gorkhas from different walks of life were present for the AGM of BGES, for the development of the Gorkha Community. The AGM was concluded with the positive note & thanks giving by The Chair, followed by refreshment and personal interactions.