12:40 PM
•
Hill
8 Nov 2015: Demanding a development board, the Scheduled Caste community of the hills today organised a rally in Darjeeling and threatened to start an agitation that would include dharnas and indefinite hunger strikes. The Scheduled Caste community too wants a set-up on the lines of the Lepcha, Bhutia, Sherpa and Tamang communities which have been granted development boards by the Bengal government. Today, the community under the banner of the All India Nepali Scheduled Caste Association (AINSCA), took out a silent rally in Darjeeling town to highlight their demand. “We too want our community to develop like others in the hills. If the state government can establish so many boards, why not give one for our community? We have raised the issue with chief minister Mamata Banerjee and also submitted a memorandum to her during her last visit to the hills,” said Govind Narayan Lomzel, the AINSCA general secretary. He added, “We had also taken up the matter with GTA chief executive Bimal Gurung, but we were suggested to place the demand with the state government.”

The chief minister has also announced a board for the Mangar community would be formed soon, which has further antagonized the Gorkha Janmukti Morcha that rules the roost in the hills. Besides a development board for the community, the association also wants reservation for the community within the Gorkhaland Territorial.
Administration, appointment of 204 teachers in high schools and higher secondary schools and implementation of a 100-point roster in the hills. “We make up 17.2 per cent of the hill population. In the GTA we do not have any reservation, which is why we want proper representation. Our educated youths remain unemployed and therefore we want the 204 teachers from our community to be given appointments in schools,” said Lomzel. The GTA has 45 elected and five nominated Sabhasads who run the affairs of the council and the Sabha.

Although the association has announced its decision to go on the agitation path, it has decided to wait and watch for the time being. “With regard to our three demands we are giving an ultimatum of one month after which we will hold programmes either in Delhi or in Darjeeling. Such programmes could be fast onto death or dharnas,” said Lomzel. When contacted, GJM general secretary Roshan Giri said, “We support the demand of the Scheduled Caste community for reservation in the GTA and also appointment of the teachers. We have taken up the matter with the state government and will do so again tomorrow in the bipartite talk in Kolkata. As far as the demand for a development board is concerned, we believe all communities should get one.” 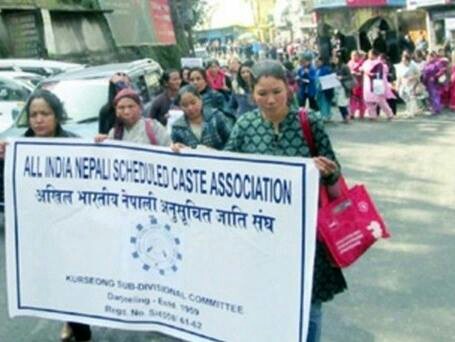 9:54 PM
•
Sikkim
9 June, Gangtok : A public hearing for inclusion of Dewan, Bahun, Chettri and Newar communities of Sikkim in the Central OBC list was convened today under the auspices of the National Commission for Backward Classes, Government of India.
The communities who were well represented submitted their memoranda to the Commission. The representatives also placed before the Commission evidences to suggest their eligibility to the Central OBC category.

The Chairman and members of the NCBC put forth pertinent questions to each of the communities.

Later, addressing a press conference, Chairman NCBC Justice Mr. V. Eswaraiah stated that a community can be granted a special status only if it is socially and educationally backward, with occupation as the criteria. The Chairman however maintained that the Government of Sikkim has made several representations to the Central Government seeking OBC status for these four left out communities citing geographical, social, cultural and economical uniqueness of the State.

Meanwhile, the Chairman lauded the developmental model of the State and labeled the State as a trend setter for others to emulate.

Earlier the welcome and key note address was delivered by Chairperson SCBC Mr. T.N.Sharma. The programme concluded with vote of thanks proposed by Member Secretary SCBC Mr. R. Telang.

7:46 PM
•
tribal news
Darjeeling Shri S. S. Ahluwalia and GTA Delegation led by GJM chief Bimal Gurung met Minister of Tribal Affairs for inclusion of 11 communities in ST list.
Member of Parliament of Darjeeling Shri S. S. Ahluwalia along with the GTA Delegation led by Shri Bimal Gurung, Shri Rooshan Giri, Shri PT Ola and Shri Benoy Tamang paid a courtesy visit to Shri Jual Oram, Hon'ble Minister of Tribal Affairs.
The GJM delegation appraised the the Hon'ble Minister the immediate inclusion of 11 communities from Darjeeling and Dooars region Bhujel, Gurung, Mangar, Newar, Jogi, Khas, Rai, Sunwar, Thami, Yakhha (Dewan) and Dimal in the List of Schedule Tribes under the Government of India.
The delegation also submitted all necessary documents needed for the inclusion of these 11 communities in the ST list.
The delegation explained the Hon'ble Minister that the the demand of granting of tribal status to all the Gorkhas except Scheduled Caste was stated in the agreement of the Memorandum of Agreement of the Gorkhaland Territorial Administration .
"I am happy to state that the Hon'ble Minister gave a very positive response to the above demand and we are confident that the 11 communities will be included in the ST list soon." Bimal Gurung

10:30 AM
•
tribal news
In an effort to preserve the community’s cultural practices, the All India Newar Organisation (AINO) today held a community ‘Bael Vivah’ (marriage with the Bael fruit) here at Dharmoday Vihar.

Citing another example, Shayka said: “The custom of marrying with fruit is also followed by a tribal community in Nagaland. Apart from that community, the Newar community is another that follows a similar custom. This is one of the key aspects defining tribal communities.”

The function saw huge participation of people coming from several places including Kalimpong, Darjeeling, Mirik and Kurseong. Addressing the people, former Professor at Kalimpong College and Khas community member Kumar Chettri said, “As clearly expressed by our traditions Khas community is a tribal community. Our daily life style and cultural background prove this fact.” The function was also addressed by community leaders like Dr. RP Dhakal, Manoj Parajuli, Tanka Chettri, SP Upreti and Binay Nepal among others. The function was also marked by performances of cultural dances and music.

10:13 AM
•
tribal news
In an effort to intensify its struggle for schedule tribe status, the Khas Janajati Mahasangh has undertaken the task of forming unit committees in several places in Kalimpong. As part of the process the organization today formed a branch committee at Nokdara in Lava after holding a meeting at Rampuri Mandir premises here. The meeting was attended by organization’s Gorubathan president Durga Bahaduri Thakuri, Kalimpong sub-divisional committee president Mahendra Budathoki and assistant secretary Sibhu Chettri along with members of 85 Thakuri families of the region.


Ashok Thakuri and Bhim Bhadur Chettri have been elected to the posts of president and secretary respectively for the new unit committee. Besides forming the unit committee the meeting also discussed about organizational activities in demand of ST status for the Khas community.

Asserting that the presence of the CM on the second day of the convention has almost been fixed, Blon said the organization will press for the formation of TDC. It has been informed the two day function will be attended by over 5000 members of the Tamang community.