Formed in 2009, the JISTO comprises volunteer teachers from secondary and higher secondary schools. There are 129 secondary and higher secondary schools in Darjeeling district and according to figures from 2013, almost 528 vacancies for permanent teaching positions were available then. This number has only increased since, and the JISTO has been agitating for permanent positions for the last nine years but to no avail. Some volunteer workers have devoted almost 18 years of service, and still have not been granted permanent status.
In two memorandums submitted to the Headmaster Association of Darjeeling and to the Darjeeling MLA, Amar Rai, JISTO coordinator Amrit Gurung said, “We have devoted our valuable time and efforts to the education sector and our services can be each year when new batches of students pass out. Many of us have moved beyond our youthful years, but we are still being forced to agitate for our rights. What sort of a situation is this??

“The educated people of the hills are receiving a wrong message upon witnessing the helpless condition of the voluntary teachers. Due to non-receipt of adequate provisions from the state government and the Gorkhaland Territorial Administration, the teachers are not making any progress. We cannot overlook the fact that if things are not mended in time, the students of the hills will face a bleak future.”

The GJM’s poll manifesto ahead of the Vidhan Sabha elections included a clause to make JISTO members permanent. The organisation seeks support from the Gorkha Janmukti Morcha and hopes their prolonged agitation reaches a favourable conclusion soon.

500 voluntary teachers in ‪Darjeeling‬ hills to be regularised

The volunteer teachers, under the aegis of the Janmukti Insecure Secondary Teachers’ Organisation (JISTO), held demonstrations including dharnas at Lalkothi, the Gorkhaland Territorial Administration headquarters, and outside the district magistrate office. The agitation was called off in November-end after Chatterjee met the teachers in Kalimpong and invited them to Kolkata for a meeting. Today, Giri issued a press statement from Kolkata that said the state education minister has assured to form an examination board to recruit the 515 volunteer teachers. “I met the state education minister with a delegation of JISTO

Hence, we must look into their interests too and provide age concession,” pointed out Giri. JISTO general secretary Vivek Newar could not be contacted, but organisation members welcomed the development and thanked the education minister for his intervention. 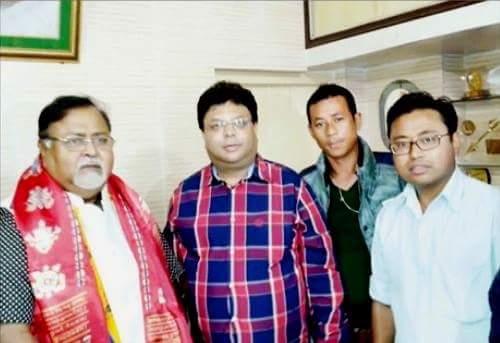 The GTA executive sabha member, Roshan Giri, today said state education minister Partha Chatterjee had invited agitating voluntary and para teachers in the hills for a discussion in Calcutta but the latter seemed to suggest that the talks were subject to the withdrawal of the ongoing dharna.

There are 515 voluntary and para teachers in the hills and they have been holding demonstrations for more than three weeks demanding regularisation of their jobs under the banner of the Janmukti Insecure Secondary Teachers' Association (JISTO), an affiliate of the Gorkha Janmukti Morcha.

Today, Giri, who is in-charge of secondary and higher secondary education at the GTA, led a delegation of JISTO members who met Chatterjee at the Circuit House here. They sought the minister's intervention to fulfil the teachers' demand.

Chatterjee, on the other hand, said while he had invited the JISTO for talks, he would also want it to withdraw the agitation.

Asked if the talks offer would stand in case the JISTO did not withdraw the dharna, he said: "I will certainly believe good sense will prevail."

The minister prefaced that by saying the 515 teachers couldn't hold the fate of thousands of students to ransom. "I told them I am a different man. Don't put pressure on me. What the last government started (the appointment of voluntary and para teachers) cannot be the responsibility of this government. But we are sympathetic towards them and under no circumstances can the quality of education be sacrificed... I have told them to come to Calcutta to discuss, but first they should withdraw their strike as the fate of students cannot be wasted."

JISTO secretary Vivek Newar, who was part of the delegation which met Chatterjee, said it would not withdraw the dharna, but would hold classes so that the students didn't face inconvenience. The JISTO has been holding dharnas at different places in the hills since October 29 demanding that the teachers be made permanent. From today, its members began a relay hunger strike at Lal Kothi in Darjeeling on the demand.

Kalimpong MLA Harka Bahadur Chhetri was present at the meeting between the minister and the delegation led by Giri.

While Giri said Chhetri didn't utter a word, the MLA said he did not participate in the discussions.

Chhetri had earlier claimed that he would facilitate a meeting between JISTO leaders and the minister, but the JISTO functionaries said they would call on Chatterjee on their own.

Darjeeling, Nov. 19: Over 5,000 casual employees of the GTA today launched an agitation demanding immediate regularization of their jobs with a poster campaign and threatened to bring the hill body to a halt.

The agitation has come when over 500 voluntary teachers are seeking regularization of their jobs, their protest hampering classes in several educational institutions in the hills.

Deepak Sharma, the spokesman for the Jamukti Asthai Karmachari Sangathan, which is affiliated to the Gorkha Janmukti Morcha, said: "Calcutta High Court had issued a directive to the state government on May 14 to convene a meeting with representatives of the GTA within four months to decide how it would set in motion the process of absorbing the casual employees. However, instead of starting the process, the government filed an appeal against this directive in the high court in August."
The casual employees, who are the workforce of the GTA, said their patience was running out. "We have decided to launch an agitation. From today, we started plastering posters across the hills demanding job regularisation. In the days to come, we will intensify our agitation and will not hesitate to bring the GTA to a grinding halt," said Sharma.

The 5,000 GTA casual employees make up almost 80 per cent of the hill body's workforce.

Kisan Gurung, the general secretary of the organisation, said: "We want the state government to immediately withdraw the appeal in the high court and announce its decision to regularise our jobs at the next bipartite meeting scheduled to be held in Darjeeling on December 15. Until that meeting, we will continue to intensify our agitation."

He did not list out the details of the agitation.

The Janmukti Insecure Secondary Teachers' Organisation (JISTO), the body of voluntary teachers in the Darjeeling hills, has also decided to launch a relay hunger strike at Lal Kothi here from tomorrow. "We will also meet state education minister Partha Chatterjee in Kalimpong tomorrow to discuss the matter," said Vivek Newar, the secretary of the organisation.

The organisation is demanding the regularisation of jobs of 515 voluntary teachers who have been working in various schools.