Besides the demand for ST status the Khambu Rai Rights Movement has also taken up issues such as introduction of the Rai language in government schools in the hills, sectional holiday on the eve of Sakewa Festival and the establishment of Khambu Bhawans in all the three sub-divisions of Darjeeling including in Kolkata.

The movement will be led phase-wise and they would even go for an indefinite hunger strike if need be.

10:05 AM
•
tribal news
The positive stance of CM Mamata Bannerjee towards Khambu Rights Movement’s struggle for ST status have pleased the Khambu-Rai community but the Rights Movement leaders are resolute to continue the fight till the central government comes up with positive assurances on the matter. Bannerjee’s assurance that she would request the centre to look into the demand has added energy to the struggle said the Rights Movement leaders while also expressing thankfulness towards the CM. 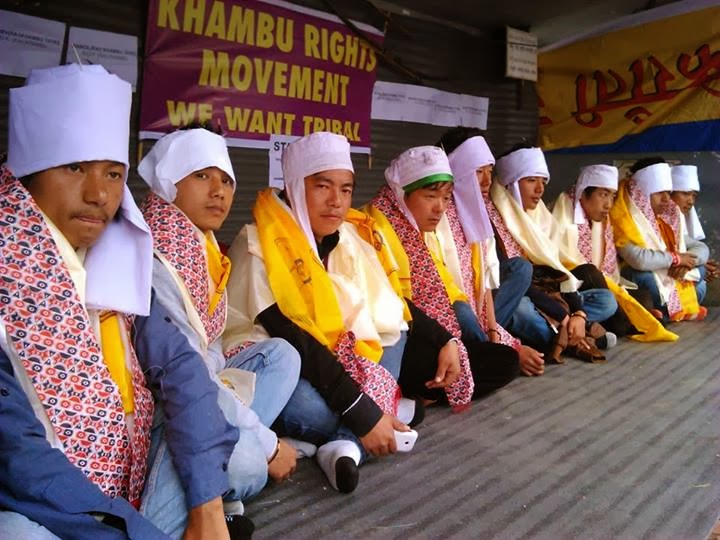 Responding to Bannerjee’s statement Rights Movement spokesperson Sandip Khambu said, “Chief Minister’s assurance to help us in our struggle has made us glad. We expect positive initiatives from her and we are optimistic we will soon be given justice.” He added the organization also welcomes GJM chief Bimal Gurung’s statement urging the communities demanding ST status to be optimistic towards CM’s assurances. He however clarified the movement will continue in the current intensity.


Several political and apolitical leaders including TMC leaders Pravin Rahpal and Nanita Gautam met the volunteers at Trikone Park to assure support for the demand.
Rahpal urged the government to ensure justice to the Rai community. Meanwhile, the secretary of the Bhutia Association also assured support to the demand.

The third day of the strike witnessed the takeover replacement of the striking volunteers by a group of nine members.

The central committee of Kirati Khambu Rai Sanskritik Sansthan also conducted a meeting at Jaganath Bhawan to discuss the ongoing agitation. KKRSS spokesperson Bishal Rai Khambu said the agitation is receiving support from several political and apolitical parties of the region. He stressed the Sansthan has no plans to meet Mamata Banerjee when she is in Darjeeling.

9:30 PM
•
tribal news
Pressing for scheduled tribe status, Khambu Rai youths today kicked-off a relay hunger strike. The move had been announced by the Kirat Khambu-Rai Sanskritik Sansthan at a mass gathering at the Mela Ground here on January 16.


The youth wing of the KKRSS is observing the hunger strike under the banner of the Khambu Rights Movement. The hunger strike started with nine youths from the Mahakal Dara unit of the organisation at the Trikon Park, Thanadara.

Stressing the Khambu-Rai community to be a tribal people, the Khambu Rights Movement has demanded ST status for the community in order to promote and develop it.

Convener Binesh Rai and Sandip Kulung were at the hunger strike venue to oversee proceedings. Speaking to the media, Rai warned if the government fails to respond positively, the organisation will be forced to come up with more intensive strategies to put pressure on the government.

10:14 PM
•
tribal news
Kalimpong, 16 January 2014: While celebrating the new year with its cultural groups Khambu Rais declared relay hunger strike in demand of tribal status to Khambus. The hunger strike will start from 18th January at Kalimpong in the banner of Khambu Rai Rights movement with a batch of nine participants declared Sandip Rai, spokesperson of KRRM. This will be followed several other programmes and it may also boycott the forthcoming Loksabha election, if needed added Rai.


The memorandum signed by the President and Secretary of the Sub-Divisional Committee of Kalimpong stated that the Constitution of India gives special privileges to the aboriginal tribes of the Indian union and the tribes called “Khambu Rais” were in Indian Sub-Continent before Indus Valley Civilization started which has been established by the extensive research of Prof. G. P. Singh – an eminent historian of our country. He has researched for his entire life and brought these facts before us who said that how Kiratas (other name of Khambu Rai explained later) have contributed in the development of Indian civilization and were supressed politically, socially and culturally by the Aryans over 5000 years back in his work “Researches into the History and Civilization of the Kiratas” (Gyan Publishing House, New Delhi 2008 pp 1-572), stated the memorandum.
It also said "however, due to some misconceptions and misunderstanding about us among the policy makers of our country, we have not yet been considered as the indigenous tribal of our country. More so because we are shy in nature and we do not come out to claim our rights. Further, majority of the Khambu Rai live in remote villages, inside or in periphery of the forest areas.We,the undersigned on behalf of the community, would like to furnish the following facts before your honour for your kind and sympathetic consideration of including Khambu Rais in the list of schedule tribal of our country."

"1.That we the “Khambu Rais” are also called “Kiratas” that has been established by almost every scholar on the Eastern Himalayas. Charles McDougal writes, “Rais and Limbus are descendants from the ancient Kirati”. Even today, most of us call ourselves “Kirati” and our organisation itself bears this word. Earliest mention of the population of the Eastern Hills, contained in the ancient Hindu epics such as the Mahabharata, speak of the Kirat as fierce barbarians of Mongoloid race, noted as inhibiting the country between the Sun Kosi River and Bhutan including a parts of present day Sikkim but occasionally venturing into the plains (Charles McDougal, 1979: 1-2).

2.That it may be mentioned here that Government of West Bengal had earlier recommended for inclusion of Limbu and Khambu Rai communities in the list of Schedule Tribes of West Bengal, and the union Government included the Limbus but Khambu Rai was not included in the list at that time. The West Bengal Government had conducted a study on ethno-cultural and socio-economic aspects of Limbu and Khambu Rai, in which it was found that both the communities are very close to each other. However, we, the Khambu Rais were deprived and we were not given what we deserved being to get rightfully then.

3.That the Khambu Rai community has its own cultural traits which are unique and which just cannot be identified on any superficial study. For example, when dead body departs from the house Rs. 1.00 coin is attached on the forehead of the dead body. It is considered that the soul shall have to travel a long way to be assembled with the soul of the ancestors and for the journey the soul will require some travelling expenses. The coin will serve the purpose etc.
4.That regarding language, it may be mentioned that we have their own language.It is also worth mentioning here we have quite distinct and different history of our own. On religion, the majority of Khambu Rai still practice our traditional religion, which has some similarity with Shamanism or Bon – a primitive form of religion.

5.That we have certain cultural similarities with the Limbus (already included in Scheduled Tribe list of India). The way the traditional priest of Limbu perform the ritual are more or less same with that of ours and we call our priest as “Mangpa” or “Bonpa”. We believe that the well being of our family and misfortune including any type of ailment are caused and governed by the spirits of the ancestors. So, we worship our ancestral sprits every day. We participate in the “ Nature Worship”.

6.That the majority of Khambu Rai people (86% as stated by West Bengal Government) live in rural and jungle areas, where our dwelling houses are located on the stiff gorge. There is no way of easy communication in our community.

7.That we are very shy type of people. Poor economy of the Khambu Rai associated with low level of education add up to the this nature more at large. Besides this, we also have barrier of language to communicate with neighbouring people.

8.That our community shows a comparatively little occupational mobility due to barrier of language to communicate with neighbouring people and also because of our poor economy as we are associated with low level of education that adds up to our shyness at large.

" It further said , "therefore, we earnestly request your honour to kindly take up the matter of recognising Khambu Rais as the scheduled tribes of India and provide our children and grand-children an opportunity to be able to come to the national mainstream competing with other citizens of our country on nation building for stronger, brighter and world leader Hindusthan. Our forefathers were compelled by the Aryan Kings then to follow their religion and culture or face the death penalty that jeopardised the entire religious and cultural life of the Khambus and now over 5 decades, we all Khambu Rais are reorganising our lost cultural heritage and if at this stage, the Union Government comes up to help us by giving our rights what is due to us, it will immensely help us in coming to the national mainstream."

"Calling all Khambu (rai) brothers n sisters to show their solidarity and support with zealous intentions for one common goal to reach that one common destination. We request you to participate in this event."

The youths of the organisation were seen today in town putting up posters wishing New Year greetings and inviting community members to the Kirat Khambu Rai gathering on January 13 in Kalimpong..

The organisation has been demanding tribal status for the Rai community since the past several years. The function on January 13 is part of the demand for tribal status.