Addressing the adoring public, Mr. Ghising said, “thank you for the warm welcome, your overwhelming love today made me remember my heavenly mother, following her death, it was from Kurseong that we had to take back her dead body down to the plains as GJM workers were sitting on a dharana to prevent her dead body from entering Darjeeling in order to avoid trouble in the hills, I informed Appa (Late. Subash Ghising) and we decided to go back today I am here and you all have made me feel that my mother stands vindicated thank you for all that”Mr. Mann Ghising said that in 2007, Late. Subash Ghising did not leave Darjeeling due to fear, he left the hills to avoid another round of blood-bath. Mr. Ghising said that only 6th Schedule Status for the hills would ensure true autonomy, development and fulfill the aspirations if the hill people. 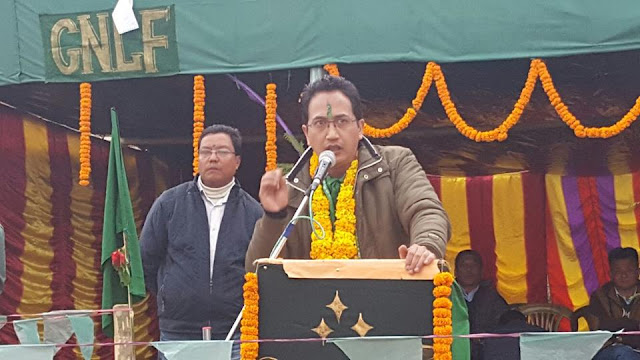 “Today I am here,” he said thanking the supporters.

On the GNLF’s stand on statehood issue, Mann said 6th Schedule Status for the hills would ensure true autonomy, development and fulfill the aspirations if the hill people.

The “bills that reach the Parliamentary Standing Committee are never discarded, so it would be easier for the hills to gain autonomy via 6th Scheduled Status, as both the Center and the State had at one point of time agreed to the status. So it would be easier to convince them.”

“.. After getting 6th Schedule, the path to Gorkhaland statehood would be faciliated,” he said.

Darjeeling, Dec. 22: The GNLF today said its president Mann Ghisingh would visit every nook and corner of the hills from December 26 as part of a campaign to mobilise support for the inclusion of the region in the Sixth Schedule of the Constitution.

The GNLF has also announced that the party will hold street corner meetings at places that Ghisingh will visit.

Mahendra Chhetri, the general secretary of the GNLF, today said: "Our president will start a campaign from Kurseong subdivision on December 26. To be more precise, he will be first touring the Mirik-Soureni-Panighatta-Sukna area and then come up to Tindharia-Sonada-Rangbull. The campaign will be to seek people's support for the hills to be brought under the Sixth Schedule of the Constitution."

He added: "Street corner meetings will also be held at various places across the hills. Once the Kurseong leg is completed, similar visits will be made to various DGHC constituencies in Kalimpong and Darjeeling as well."
The GNLF plans to complete the campaign in one month. "At the January-end, a public meeting will also be held in Darjeeling," said Chhetri.

Observers say the GNLF, whose 21-year-old rule in the hills was replaced by the Morcha in 2007, now believes Gurung's party is losing popular support.

"The objective of the campaign is to go to the people and tell them about the benefits of the Sixth Schedule status, which has legislative powers, unlike the GTA. Under the Sixth Schedule, there will be a constitutionally recognised body," said Chhetri.

Asked about the campaign, Roshan Giri, the general secretary of the Morcha, said: "The people of the hills have already rejected the Sixth Schedule status demand."

Darjeeling, Sept. 27: Several leaders of the Gorkha National Liberation Front (GNLF) who had been inactive since 2008 attended a party meeting today, giving a fillip to the organisation at a time the Gorkha Janmukti Morcha (GJM)is facing rebellion with the resignation of two leaders.

The GNLF leaders who addressed around 700-800 people said today if the party could not take advantage of the situation now when the Morcha seems to be losing its hold in the hills, it would be a "great loss".

For the past one month, the GNLF has been holding such meetings in Darjeeling, Kalimpong and Kurseong every Sunday but this is the first time that so many former senior leaders attended it.

Eight former councillors of the erstwhile Darjeeling Gorkha Hill Council, who were inactive after GNLF founder Subash Ghisingh left the hills in 2008, were present at the Gorkha Dukha Niwarak Sammelan hall here today.
"The Morcha is losing its grip in the hills. This is becoming clear from those who are leaving the Morcha. If we cannot take advantage of this situation now, it will be a great loss for the hill community and the cause we are espousing," said N.B. Chhetri, former Kurseong MLA, referring to Harkha Bahadur Chhetri and Trilok Dewan who left the Morcha recently.

Maan Ghisingh, president of the GNLF and Subash Ghisingh's son, said: "In the present situation, the Sixth Schedule status is the best alternative. If this agreement is not honoured, the situation in the hills could get worse. We invite intellectuals to point out if there is anything wrong in the Sixth Schedule pact. If there are mistakes, we will try to rectify them. Apart from Gorkhaland, if anyone can suggest any other set-up better than the Sixth Schedule, we are ready to look into it."

The memorandum for implementing the Sixth Schedule was signed on December 6, 2005. But with the change in the political situation, nothing proceeded after that.

Bhanu Lama, one of Bimal Gurung's close friends when the present Morcha chief was with the GNLF, was given the charge of organising the party. He said the GNLF would hold a meeting at Tukvar and Lebong constituencies soon. Tukvar is Gurung's constituency.

Morcha assistant secretary Binay Tamang said: "Those who are saying we are losing grip should comment after our meeting organised by youth in Kalimpong on September 30."