Pune, Maharastra 12th Sept 2016: The gorgeous ‘Gorkhali Gabhuru’,  Asom Xontan and Pride of the North East Rewati Chetri was crowned Miss International India 2016 in its first edition of the beauty pageant that took place at Novotel Hotel in Pune on Sunday night. She bagged the title defeating 16 other contestants and will now represent India at the Miss International 2016 pageant happening next month in Tokyo, Japan.

23-year-old Rewati was born to Baburam Chetri and Mrs. Bina Chetri  born and broup up in a small town of Haflong, Assam. She attended her schooling from St. Agnes’ Convent High School, Haflong and graduated in commerce degree from Lumding College, Lumding.
The full-time supermodel and also an actress, was a top 10 finalist at Femina Miss India 2015  pageant where she won Miss India Miss Popular and Miss Multimedia subtitles. Rewati represented India at World Miss University 2016 pageant, held in Beijing, where she bagged the continental crown of Miss Asia University.

In July, she made her debut film in a Hindi flim “Gangs of Northeast”, directed by Rupak Gogoi and co-produced by Sanjive Narain and Kenny Lyngdoh Talang.

Speaking to this correspondent from her hotel in Pune the super model said, ‘I must thank my friends and supporters who lend their support and blessings Miss India happened last year. I cannot name all of them but I sincerely acknowledge immense support from my family and closed friends who stood by me thick and thin. I must credit the social media enthusiasts and North Eastern print and electronic media for their publicity and support that made the way for me to crown Miss International India.’

The super model further added I am now called ‘Gorkhali Gabhuru’ joni from the famous lyrics of Mahamanab Asom Ratna Dr, Bhupen Hazarika – the legend dedicated to Gorkhali beauty of Assam at Kapili river. I must thank my people back home for awarding me this title and keeping me in their prayers and blessing me through out. I will try my best to bring home for India the Miss International 2016, which will be the 56th Miss International pageant; it will be held on October 27, 2016 at the Tokyo Dome City Hall in Tokyo, Japan. It is one of most prestigious and premier pageant in the word founded by the Japanese. She has soughed nation’s support for the Miss International contest.  If she makes it, she will be the first Indian to achieve this feat.

Back home her school, college, university friends have began celebration and social media is full or random shares of her crowned photos. The modeling and fashion fraternity have congratulated her for bringing laurels to the state. The All Assam Gorkhali Mahila Samitee, Greater Guwahati Gorkhali Mahila Samitee, AAGSU Guwahati City Committee, AAGSU and Bharatiya Gorkha Parisangh, Dima Hasao District committee and the GACDC have also extended congratulations message to Rewati Chetry. Several students and youth organizations, civil society organizations too have applauded the young model’s feat.

The gorgeous Gorkha beauty from Assam was crowned Senorita Miss International India 2016 in its first edition of the beauty pageant that took place at Novotel Hotel in Pune on Sunday night. She bagged the title defeating 16 other contestants and will now represent India at the Miss International 2016 pageant happening next month in Tokyo, Japan.

Rewati on her FB Post wrote:
"Here I am crowned as Miss India for Miss International 2016.
Thank you God for all the blessings. I know you love me way too much. Thank you for answering my prayers.
Mama, Papa - your little daughter made your dream come true. You raised me up to be who and what I am today. I love you both always.
My sister and brother - you both have been the two shadows of my life always guiding me in the right path. This wouldn't have been possible without you both.
Senorita India Beauty Pageant - thank you so much for choosing me as your winner. I promise to add value to the team and have an amazing reign.
The Voice of Sikkim & NorthEast Today- thank you for all the posts made on behalf of me to create awareness about the my journey at Senorita India 2016
At last but not the least my relatives, friends and every loved one on all social medias. It's your love, support and encouragement that keeps me going. Be with me always.

I will be representing India once again. This time at the prestigious Miss International pageant next Month in Japan. Will definitely give my best shot. Please keep me in your prayers and support me as you always do.

The full-time supermodel and also an actress, was a top 10 finalist at Femina Miss India 2015  pageant where she won Miss Popular and Miss Multimedia subtitles. Rewati represented India at World Miss University 2016 pageant, held in Beijing, where she bagged the continental crown of Miss Asia.

In July, she made her debut film in a Hindi flick “Gangs of Northeast”, directed by Rupak Gogoi.

17 ‪‎Gorkha‬ Luminaries to be Felicitated in Gorkha Talent Show Assam

9:39 AM
•
Shiva Thapa
Seventeen luminaries from across Darjeeling district and Assam will be felicitated during a historic event 'Gorkha Talent Show of Assam 2016' slated for the 9th and 10 February at GMCH auditorium, Guwahati organized by Akhil Assam Gorkha Kalakar Sangh (AAGKS).

Gopal Khanal general secretary of AAGKS informed that the chief minister of Assam Tarun Gagoi will remain as chief guest in the two days event where around five thousand people will witness the historic talent show and felicitation programme.

The talent haunts for singers and dancers has already finished by conduction several rounds of auditions in entire state of Assam and finally selected 40 singers and dancers for the final round that will be held on 9th and 10th February.
Twenty three models of Assam will also walk on ramp by wearing ethnic attires of North East to promote tradition and culture and spread peace and harmony.

Prakash Rai working president of the organizing committee also informed that several film artists, sports persons, singers and dancers are participating in the show where more than five thousand audiences will witness the historic event in North East.

Talking to the mediapersons in Beijing last evening the Indian diva now World Miss University - Miss Asia Rewati Chetri said, ‘I must thank all the wonderful people back home for their wonderful support and continued blessings. I must sincerely acknowledge efforts of my friends and family members who have been my source of inspiration. My journey from a small town girl , city model to Miss India platform and today Miss Asia at World Miss University wouldnot have been possible with the professional help and guidance from my managing agency Mantraa Media & Events, grooming salon Kurls & Spykes in Guwahati. Entry to WMU2016 paegent was possible only after meeting Janaranjana Pathirana of Shades Mirror the organizer of Interantaional Fashion Fest, Colombo Srilanka where I walked as Show Stopper. 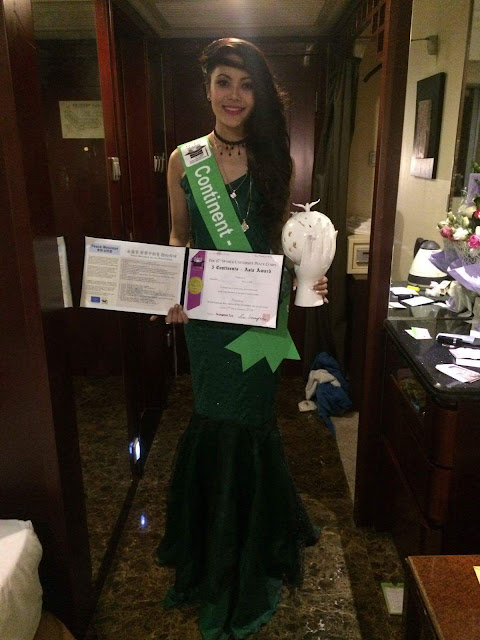 Kelin Rivera Kroll from Peru was crowned with the title of Miss World University 2016 in Beijing, China by the outgoing titleholder, Karina Stephania Martin Jiménez from Mexico after beating about 70 other crown contenders.

Another good news is that Rewati who is landing in New Delhi on 30th Jan 2016 after her successful stint and Miss Asia title at WMU2016 in China has made it into Top 50 of Times Most Desirable Women 2015 along with Top Bollywood actresses likes of Anushka Sharma and Kangkana Ranaut. People can follow and vote her in this link http://ww.itimes.com/times-polls/times-most-desirable-women-2015

As an event was organized by the International Association of University Presidents after the United Nations named 1986 the Year of Peace, the organizing committee dispatches peace missions to regions in conflict like Kosovo and Rwanda. These days, the event is organized by World Miss University Organizing Committee which has headquarter in Manhattan, New York, USA.

The current titleholder is Michelle Lucas of the Philippines who was crowned on December 19, 2015.
Rewati has already made the Indian Gorkhas proud several occasions in the past and we hope she'll make us proud this time around too. However, one cannot deny the fact that by representing nation in the event such as World Miss University she has already made the community, rather the whole of North East proud of her.

What can you do?
Vote for Rewati to win Miss Popular at World Miss University 2016. Follow the below link.
http://www.wmu.world/board_DRfW87