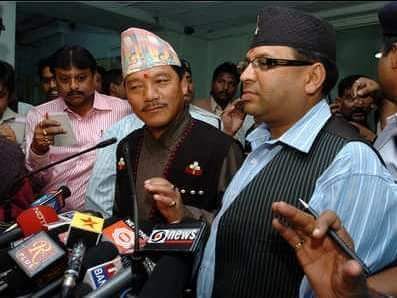 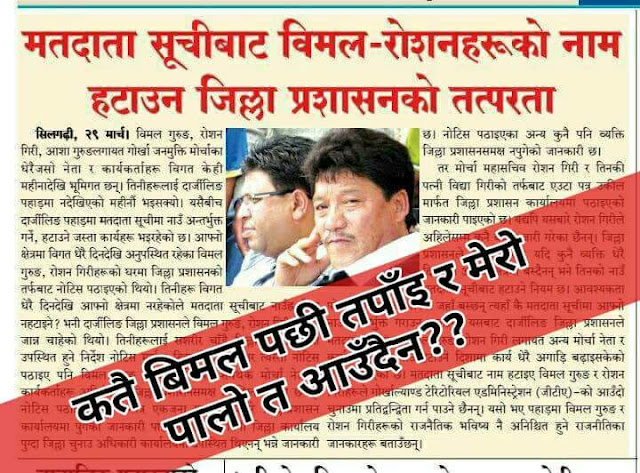 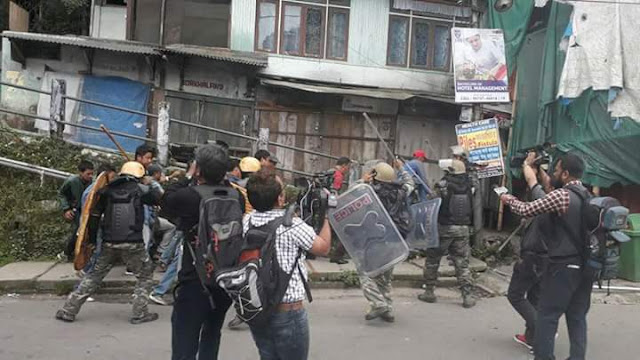 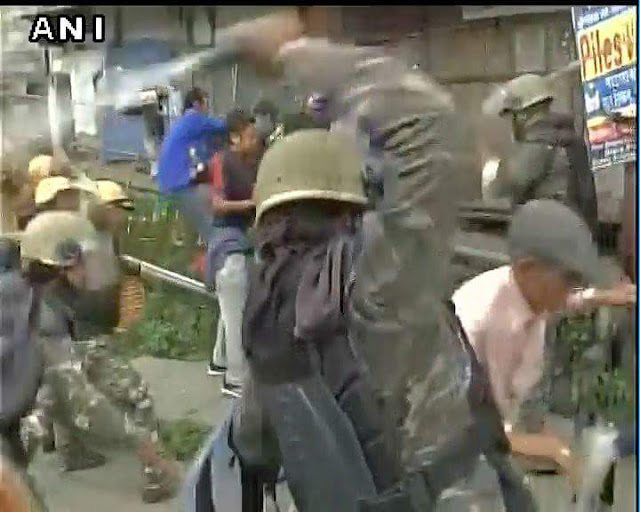 3:05 PM
•
Roshan Giri
DARJEELING 24 Aug 2016 More than 200 voluntary teachers of primary schools in the hills today burned the effigy of Gorkhaland Territorial Administration Sabhasad Roshan Giri in Darjeeling town and submitted a mass resignation from the Gorkha Janmukti Morcha, the party they were linked to. 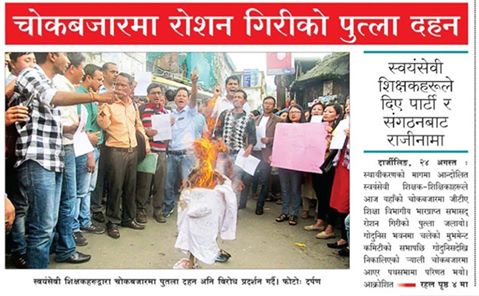 On August 2, GJM general secretary Roshan Giri had issued a press statement after meeting union home minister Rajnath Singh in Delhi and placing a memorandum with the statehood and other demands. In his statement the GJM general secretary had said, “The union home minister has assured to hold a meeting after August 15 that will decide on the formation of a committee, to verify our demand for a separate state”.

The GNLF legal advisor said that in his RTI that was filed on May 2, 2016, he had made four queries.
Zimba said questions one and two referred to which political party from the Darjeeling was the first to raise the statehood demand and since then how many parties had raised the issue with the central government. While the third and fourth queries were on the views of the Union government in this regard and available certified copies of the circulars and the file notes in which the issue of a separate state of Gorkhaland was discussed in the last two years. “You will be surprised by the reply from the CPIO that was made on May 24, 2016. In his reply to my first two queries, Jain has said that the CPIO does not maintain such information. On the other hand for my third and fourth queries, the CPIO has said that the central government does not have any proposal under consideration regarding creation of the state of Gorkhaland,” the GNLF leader said.

The GNLF legal advisor alleged that GJM was only resorting to gimmicks vis-à-vis going to Delhi and meeting central leaders from the BJP including Prime Minister Narendra Modi, on different pretexts over the years. “GJM leaders only go to Delhi to take pictures with BJP central leaders. Nothing more than that ever happens,” said Zimba.

The BJP too came under fire from the GNLF leader, who the latter alleged was betraying the Hills people with false promises and specifically highlighted saffron party’s word-play on its 2014 election manifesto.

In its manifesto, the BJP has said that it would “sympathetically examine and appropriately consider” the long pending demands of the Gorkhas. The word Gorkhaland does not find mention anywhere. However, in the case of the Bodos and other tribals of Assam, the party says that “initiatives” will be taken for a permanent solution of their long pending issues.

Zimaba observed, “There is vast difference in the BJP’s outlook towards the people of Darjeeling Hills and those from other states which is reflected in their election manifesto. Words like sympathetically examine and appropriately consider which can mean several things are used for Darjeeling. Also our issue is shown as demands. Whereas, the BJP says initiative, in this case steps will be taken for a permanent solution of long pending issues of the Bodos”.

The GNLF perceived to be cozying up to the TMC is advocating for implementation of sixth schedule in the Hills and has chosen not to take a stand on the statehood issue. “We have neither compromised nor given up the Gorkhaland demand. It is just that our party does not have the mandate for a separate state and so we are pursuing the sixth schedule issue which we feel is the best solution,” said Zimba.

When asked to comment on the allegation, Giri said, “We are sincere with the statehood demand and are pursuing it over the years with the central government. We have nothing to say to those people whose sole purpose is to criticize us for no rhyme or reasons”.

12:24 AM
•
Roshan Giri
Darjeeling, July 8: The Gorkha Janmukti Morcha today dissolved the JISTO Movement Committee that was spearheading an agitation for regularisation of over 500 voluntary teachers in hill schools and was critical of Roshan Giri's handling of the issue.

The movement committee had criticised GTA executive sabha member in charge of education Giri for quite sometime for his alleged failure to solve the issue. The committee had set a deadline of 20 days to fulfil the demand that ended today.

Binay Tamang, the assistant general secretary of the Morcha, today said the party's central committee was dissolving the JISTO Movement Committee. "Bimal Gurung has decided to dissolve the JISTO Movement Committee, which had been formed from our frontal organisation, JISTO, to spearhead their movement. The frontal organisation, JISTO, however, will not be dissolved," Tamang said. The claim has been contested by the committee.

Asked about the reason for dissolving the committee, Tamang said: "It is being dissolved for various reasons," but gave none of the reasons.
The Janmukti Insecure Secondary Teachers' Organisation (JISTO), a frontal organisation of the Morcha, has been demanding that more than 500 voluntary teachers in six junior high schools (till Class VIII), 52 high schools (up to Class X) and 71 higher secondary schools in the hills be made permanent. The School Service Commission (hills), which essentially is to cover the present GTA area, has been defunct since 2003 and that is why the schools had to appoint the voluntary tea-chers.

"It is because we expressed our displeasure over Roshan Giri's inability to solve the problem that the committee is being dissolved. It only proves that the Morcha is running away from the problem rather than solving it. Efforts are being made to break our unity but all teachers are together and we will continue our agitation," he added.

Asked about the next step, Amit said: "Since they dissolved the committee only today, time will tell what move we will take."

On July 5, Giri had met state education minister Partha Chatterjee and demanded that an ad hoc selection board be formed to make 519 voluntary teachers permanent.

After the Calcutta meeting on July 5, Chatterjee had said there were several part-time (voluntary) teachers who did not fulfil the eligibility criteria recommended by the National Council for Teacher Education, the apex body that regulates teachers' education in the country. He said the government would consider absorbing the teachers with required qualifications.