Former GNLF leader and ex- MLA Mrs Shanta Chettri, who has been nominated as Trinamul Congress candidate for the Rajya Sabha elections, stood by the state government's decision to introduce Bengali language in schools and said that there is no harm in Learning a new language.

Moreover, according to the minister, Arup Biswas, Bengali will be added to the syllabus in schools as an 'optional' subject, which clearly means that only ‘interested' students need to take up the subject.

The Gorkha Jan Mukti Morcha (GJMM), on the other hand, has taken the ‘language issue' in a different perspective, and has been politicizing this matter for no appropriate reason, Mrs Shanta Chettri said.

"GJMM has totally politicalised this topic and created divisions among us. There is no imposition by the government; the gazette notification is not yet out but they have already created fuss about it everywhere," Mrs Chettri said.

As the students reach class V, they are given the liberty to choose any language out of Hindi, Nepali, Sanskrit, Dzhonka, or now Bengali, Mrs Chettri, who visited Kalimpong today to meet party cadres, said. She explained that Bengali was just a matter of third Language and it's up to the students to choose what to study.

After her nomination for the Rajya Sabha, she has been visiting every nook and corner of the Hills to assess the problems of the civilians.

Talking to reporters here, she assured to work for the people with utmost responsibility and said she will keep herself busy for some time by visiting various places so that she can identify people's problems and keep her word in the Raiya Sabha later.

‘The motive of my visit is mainly to meet people who are still hindered from getting their facilities and beneﬁts. In these ﬁve years, GTA has received crores of rupees from the Centre and the state government but is still failing to do its job right. Be it in the towns or outskirts, they have not done anywork anywhere' said Mrs Chettri.
[Via: The Statesman] 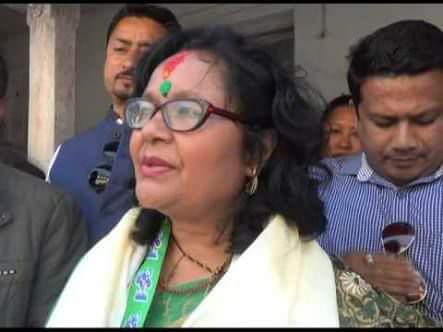