4:48 PM
•
music
Nepali singer Smt. Aruna Lama (Pradhan), born in Darjeeling, was conferred the prestigious Nepal Ratna, Mahaujjwal Rashtradeep Award (Suprabal Janasewa Shree Tritiya) for her contribution to promoting Nepali music around the world. The President of Nepal, Bidya Devi Bhandari conferred the award at a special ceremony held at the Office of the President, Maharajgunj.
  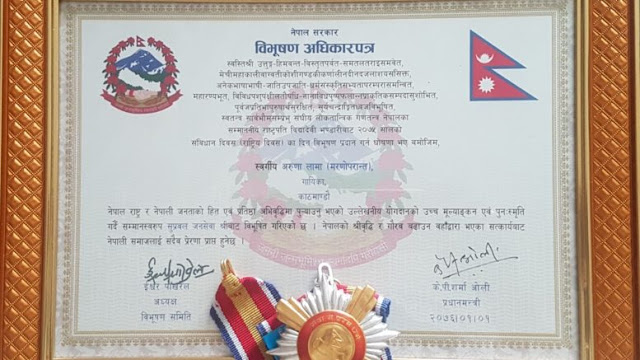 Born on the 9th of September, 1945 at Ghoom Pahar, Darjeeling, Aruna Lama is popularly known as the “Nightingale of the Hills”. She has rendered hundreds of Nepali songs and left an indelible mark as one of the finest Nepali singers.
 
The illustrious title by the Nepal government is conferred on  Nepali citizens and foreigners who make outstanding contributions to the welfare of Nepal and Nepali language and art. 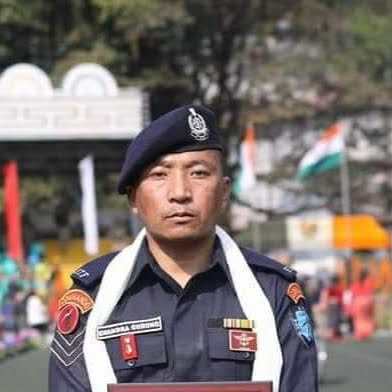 11:39 AM
•
Gorkhas of Sikkim
Gorkhas daughter from Silkim Miss Draupadi Ghmire has been conferred the prestigious National award Padma Shri for 2019 for ker tireless service in the field of social work.

Draupadi Ghimire, is a social worker and the founder of Sikkim Viklang Sahayata Samity. She has been nominated for her distinguished sevice in providing comprehensive service with the persons with disabilities. Her NGOs help people with artificial limbs and hands and also provides free cleft platate surgeries. Originally a nurse at the STNM, she took it upon herself to help those with physical disabilities. She hails from Gangtok and has also been awarded by state government and other agencies for her selfless contribution. 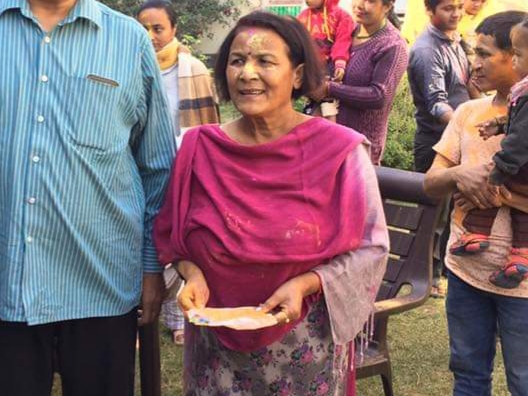 " I am humbled by the announcement, It wouuld help he extend my service to more needy ones" she says, 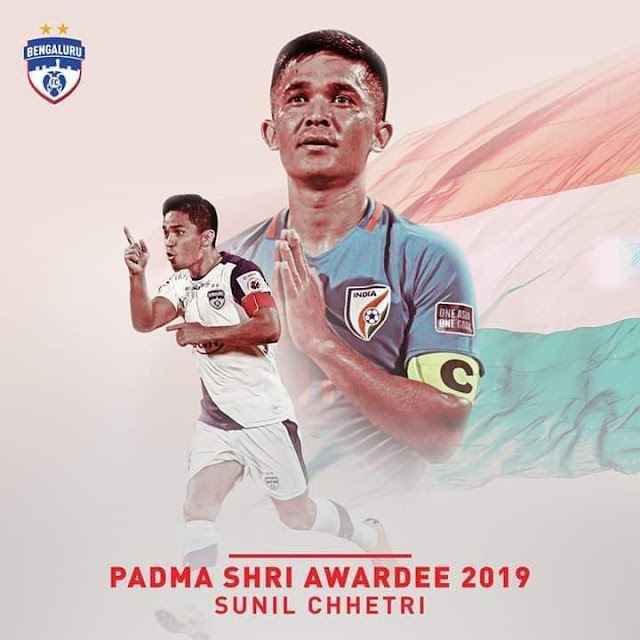 Popularly known as Captain Fantastic Chhetri has been named as an 'Asian Icon' by AFC on 3rd August 2018.Chettri has not looked behind since he began his professional career at Mohun Bagan in 2002.

We, Indian Gorkhas, would like to congratulate Sunil Chettri for doing us and nation proud once again. 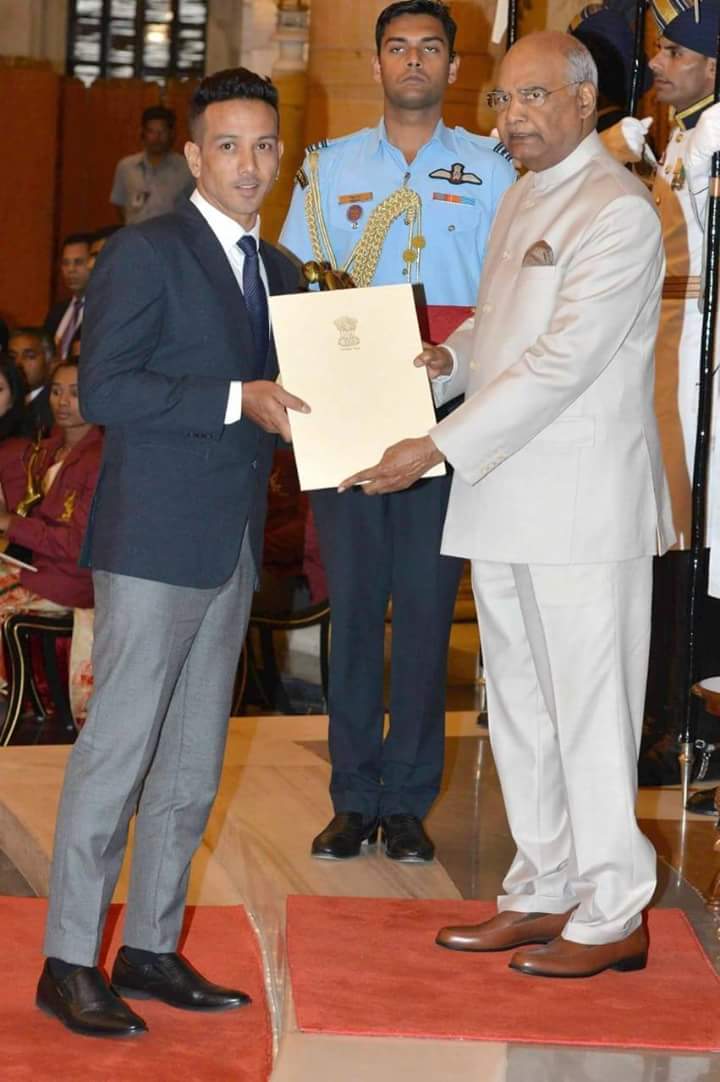 But the rarest of those honours, that every sporting individual dreams of all life long, is to lead the team in the Olympics.

Bharat Chettri - local Kalimpong lad has lived all the dreams any sports person can dream of.

He has the distinction of being the first goalie ever in the history of Indian hockey to lead Team India at the Olympics. He has participated in and won many international tournaments for India.

Yesterday, President of India Ram Nath Kovind presented Dhyan Chand Award 2018 to one of our National Icons Shri Bharat Kumar Chettri in recognition of his outstanding achievements and contribution for the promotion of Hockey.

The Dhyan Chand Award, officially known as Dhyan Chand Award for Lifetime Achievement in Sports and Games, is the lifetime achievement sporting honour of the Republic of India. The award is named after Dhyan Chand (1905–79), an Indian field hockey player who scored more than 1000 goals during a career which spanned over 20 years from 1926 to 1948.

It is awarded annually by the Ministry of Youth Affairs and Sports. Recipients are selected by a committee constituted by the Ministry and are honoured for their contributions to sport both during their active sporting career and after retirement.

We Congratulate Bharat sir for his wonderful achievement, and for being so phenomenally inspirational.

Loknath Upadhaya Chapagain from Assam, who is settled in Siliguri has won the Tulshiram Sharma 'Kashyap' award in Sikkim for his book "Kina Royaou Ppama "

He was felicitatiedted yesterday at Sikkim Sahitya Parishad with a citation and 51k cash award.

This award has been instituted by Shri. Tulshiram Sharma 'Kashyap  Pratishthan of Sikkim for books published in Nepali in the last three years

TR Sharma Kashyap happens to be the first Sahitya award winner in Nepali from Sikkim.

We congratulate Loknath sir and wish him more success in the coming days. 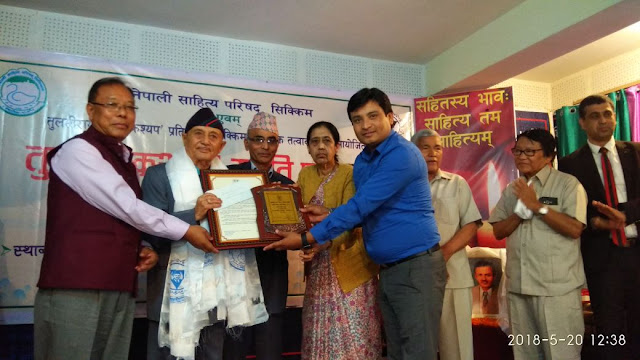 During a search operation in Kupwara, though bleeding profusely, he realised the threat to his team and with utter disregard for his personal safety, moved to eliminate the militant.
Though grievously injured, he eliminated another militant before succumbing.