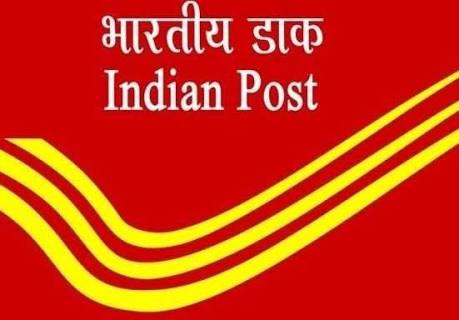 Applications are invited from the eligible candidates for filing up of 5778 posts of Gramin Dak Sewak (GDS) in different Postal / RMS Divisions in Department of Posts ,West Bengal Circle.

age relaxation is provided to the persons belonging to SC/ST/OBC/PH candidates as per the extant orders.

All the applicants who have already applied in response to the previous notification published on 25-04-2017 which was subsequently been cancelled on 02-01-2018 are hereby advised to apply online afresh based on their earlier registration and fee paid. They have t indicate their option in response to the re-notification issued by the Department , failing which their earlier application will not be considered.

Recruitment to the post of Sub Inspector West Bengal Police

Eligibility Criteria : -
(1) Age : -
The applicant must not be less than 20 (Twenty) years old and must not be more
than 27 (Twenty Seven) years old as on 01.01.2018. The upper age limit shall be relaxed
by 05 (five) years for the candidates belonging to the categories of Scheduled Castes (SC)
& Scheduled Tribes (ST) and by 03 (Three) years for the candidates belonging to the
category of Other Backward Classes (OBC).

The upper age limit for the Departmental candidates of West Bengal Police only shall be
relaxable upto 35 years which shall further be relaxed by 5 (Five) years in case of
Scheduled Castes and Scheduled Tribes candidates and by 3 (Three) years in the case of
Other Backward Classes candidates.

(2) Educational Qualifications : -The applicant must have a Bachelor’s degree in any discipline from a recognised university or its equivalent.

(3) Language : -
The applicant must be able to speak, read and write in Bengali. However,
this provision will not be applicable to the persons who are permanent residents of hill
sub-divisions of Darjeeling and Kalimpong Districts.

The last date of receipt of filled in Application Form through postal services (for off-line
applicants) is 05.05.2018 (5 PM).


The last date of deposit of Application and/or Processing Fees in respect of only the
applicants applying through on-line using United Bank of India Challan will be 10.05.2018
during banking hours due to technical reasons.

The detail information regarding eligibility criteria, method of selection, scheme of
examination, procedure for submission of application form and other terms & conditions
will be uploaded on this website shortly. Applicants must visit the website for the same.More details : Click here
READ MORE

6:16 PM
•
Sarkari Naukri (Government Jobs)
Applications are invited from unmarried male Indian citizens for grant of Short Service Commission (SSC) in Executive Branch (sports) in Indian Navy for the course commencing Jan 2017 at Indian Naval Academy (INA), Ezhimala, Kerala. Candidate to fulfill condition of nationality as laid down by the Govt. of India.

Total No of Vacancy: Various Posts

Job Location: All Over India 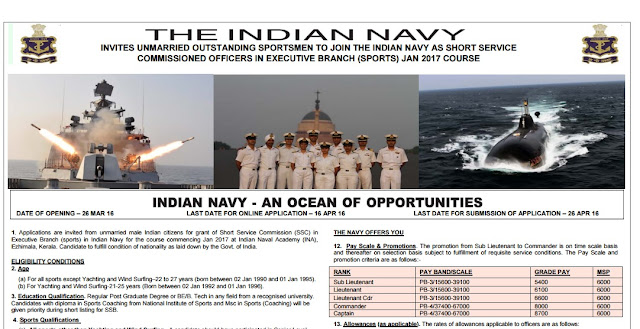 Educational Qualification:  Regular Post Graduate Degree or BE/B. Tech in any field from a recognised university. Candidates with diploma in Sports Coaching from National Institute of Sports and Msc in Sports (Coaching) will be given priority during short listing for SSB.

Sports Qualifications
(a) All sports other then Yachting and Wind Surfing. A candidate should have participated in Senior Level
National Championships/Games in following disciplines:-
Athletics/CrossCountry/Triathlon/Tennis/Squash/football/Handball/Hockey/Basketball/Volleyball/Cricket/ /Diving/Water Polo/Kabaddi/Boxing.

(b Yachting/Wind Surfing. A candidate must have at least one of the following qualifications:-
(i) Should have participated in a Senior National Championship conducted by YAI and secured a minimum of 5th position in Olympic classes.
(ii) Should have represented India at the Asian Games or ISAF Youth Sailing World Championships and secured a medal in Youth/Olympic Classes.
(iii) Should have attained a position amongst the top 50% of the fleet in a class of boat/windsurf completed at the ISAF Youth Sailing World Championship.

How to Apply:  Candidates satisfying the above eligibility conditions have to apply through online registration From Official Website: http://www.joinindiannavy.gov.in/ One copy of this Application Form is to be duly signed and mailed (posted) to Post Box No. 04, R K Puram Main PO, New Delhi - 110 066 along with the following documents:- Self attested photograph, Self attested photo copies of 10th & 12th class certificates along with Mark Sheets, other educational certificates and mark sheets of all semester/years. In case CGPA, candidate is required to attach certificate issued by the University for Conversion of CGPA in to percentage

Total No of Vacancy: 226 Posts

Job Location: Tamilnadu, All Over India 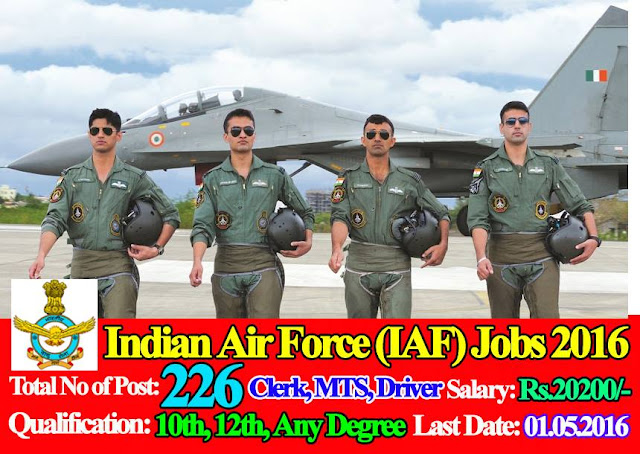 Qualification:  Candidates should have completed 10th, 12th, ITI, Any Degree or its equivalent qualification from a recognized Board/University

Age Limit: Candidates Age should be between (For LDC and Fireman - 18 to 27 Years), (For All Other Posts - 18 to 25 Years). Relaxations in upper age limit For OBC 3 Years, For SC/ST Candidates 5 Years. Candidates Relaxation in Upper Age limit will be provided as per Govt. Rules

How to Apply:  Candidates satisfying the above eligibility conditions are advised to download a copy of the application specified in the official website http://indianairforce.nic.in.and send the duly filled in application along with the copies of Certificates (self attested) in support of Educational and Technical qualifications, Community etc. should reach following Address (Address Mentioned in Official Notification) on or before 01.05.2016

Note: The Candidate should mention Application cover “Application for the post of “………..” in bold letters on top of the envelope.

Darjeeling 29 Feb 2016 The casual workers of the Gorkhaland Territorial Administration have welcomed the state government’s decision to increase their salary even as they said their long pending demand for regularisation should also be addressed ahead of the Assembly election. The state government’s finance department has issued Order No.1107-F (P) dated February 25, 2016 to revise the benefits and salary of the contractual workers. More than 5,000 workers in the GTA are working on contract basis and they have long been demanding for regularisation. The workers were initially inducted into the now-defunct Darjeeling Gorkha Hill Council (DGHC) on contract basis and were paid meagre amounts as remuneration.

In 2007, workers under the aegis of the Janmukti Asthayi Karmachari Sangathan (JAKS) started an agitation demanding permanent status. 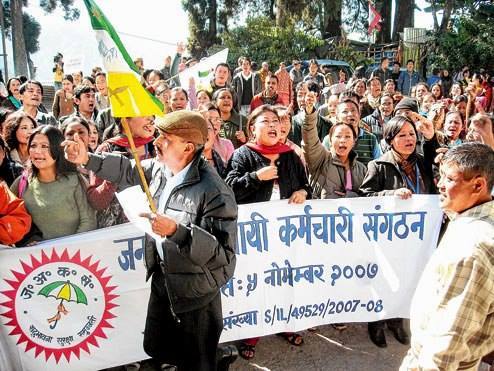 6:50 PM
•
Recruitment
The Central Employment Exchange has released an employment notification, inviting interested and eligible candidates to apply for the positions of Technical Assistant, Physiotherapist and Vocational Instructor.

Educational qualification:
Technical Assistant: The candidates interested in applying for this post should be holding a Bachelor's degree in Agriculture/Botany or any other branch of science relevant to agriculture from a recognised university.

Physiotherapist: The candidates interested in applying for this post should be holding a Bachelor's degree in physiotheraphy from a recognised university

Vocational Instructor: Thecandidates interested in applying for this post should have passed matriculation or its equivalent with national trade certificates in appropriate trade.

Age limit:
The age of the candidates applying for this post must not exceed 30 years and must be a minimum of 18 years.

Selection procedure
A test/interview will be conducted for shortlisting and selecting the candidates.

Pay scale
Technical Assistant: The selected candidates will be getting a consolidated monthly salary of Rs 5,200 to Rs 20,200, along with a grade pay of Rs 2,800.

Physiotherapist: The selected candidates will be getting a consolidated monthly salary of Rs 5,200 to Rs 20,200, along with a grade pay of Rs 4,200.

Vocational Instructor: The selected candidates will be getting a consolidated monthly salary of Rs 9,300 to Rs 34,800, along with a grade pay of Rs 4,200.

How to apply
The candidates interested in these posts are required to apply in prescribed application form and send the same along with self attested copies of educational/reservation categories/experience certificates to the concerned office.

Total No of Vacancy:

Tamilnadu, All Over India

Candidates satisfying the above eligibility conditions have to apply through online registration From Official Website: http://www.ceptamonline.org/ on or before 08.02.2016 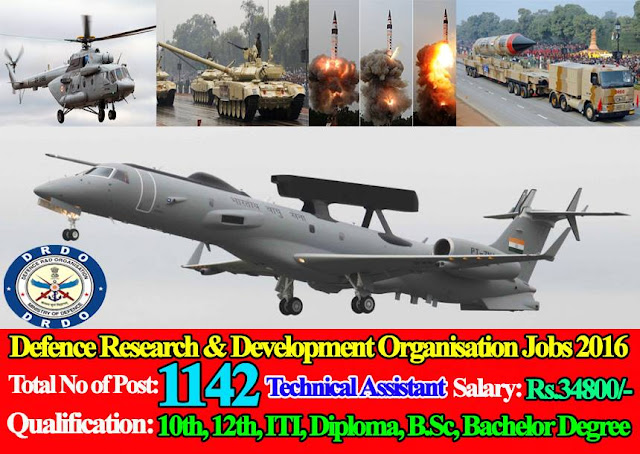 An association of casual employees at the GTA owing allegiance to the Gorkha Janmukti Morcha today indirectly lashed out at the party leadership and the hill body apparently frustrated over lack of progress in fulfilling their demand for regularisation of jobs.

The Janmukti Asthai Karmachari Sangathan today held a rally and a public meeting in Darjeeling to demand the immediate regularisation of the jobs of over 5,000 casual employees at the GTA.

Addressing the meeting at Chowk Bazar, Deepak Sharma, the spokesman for the JAKS, said: "We had supported the demand of Gorkhaland and we still support their demand. However, at Pintail Village (where the GTA memorandum of agreement was signed on July 18, 2011), they kept aside the demand of Gorkhaland. If such an important issue like Gorkhaland can be kept aside, we guess our demand is of no importance to them."

Without naming the Morcha, Sharma was clearly criticising the party for accepting the GTA.

He blamed the Morcha leadership administering the hill body for the problems at hand but refrained from criticising Bimal Gurung.
"Why have you accepted a body which is not working? Everything in the hills is in doldrums, right from the education system to the functioning of the GTA. Bimal Gurung, however, is not to be blamed as he is still helping us. But the GTA is not working," Sharma said.

This is the first time any frontal organisation of the Morcha has criticised the party leadership.

Sharma also issued a veiled warning to the Morcha leadership. "We are the ones who had played a major role in changing the previous administrative dispensation (DGHC). We hope such a situation (on the need to change the present administrative dispensation) will not arise," said Sharma. "We, however, think the GTA will not work now. We will support anybody who will help fulfil our demand."

Other leaders of the organisation also criticised the Morcha leadership for remaining aloof from the problem.

K.C. Rai, the president of the Kalimpong unit of the JAKS, said: "They have been elected as representatives of the public but we hardly get to meet them even at Lal Kothi. As Bimal Gurung is currently on a padayatra, others should be taking care of the hill body. But that is not happening."

The president of the JAKS, Machendra Subba, sought to balance things out. "Some members from Kurseong were of the opinion that if our demand was not fulfilled by December-end, we should remove the J from JAKS. However, I have told them that our problems will be addressed by the J in JAKS. We demand that the bipartite meeting between the state and GTA be held in Darjeeling and on December15 as agreed earlier," said Subba.

"The state government and the GTA should not take our demand lightly. If we do not get a favourable response at the December 15 meeting, we will intensify our agitation," he added.

Told about the criticism against the GTA and the Morcha leadership, Roshan Giri, the general secretary of the party, said: "We are serious about their problem and have been raising their issue continuously."

After the bipartite meeting on November 9, Giri had said the state government had said the next round of meeting would be held in Darjeeling on December 15.