Geetanjali Thapa to act in Macqee with local production house

11:06 AM
•
movie
Ferry Tale Pictures - a local production company led by Mr. Phurba Tshering Lama has landed one of the Best female actors in India, Geetanjali Thapa, to act in his upcoming new movie 'Macqee."
Ms. Geetanjali Thapa is an internationally acclaimed actor and has won the National Film Award for Best Actress(2013) and Best Actress in the 14th Annual New York Indian Film Festival for her performance in Liar's Dice.

10:25 AM
•
movie
Lopsang Dokpatsang, born in India (Darjeeling), a Tibetan-American fit ness expert and former Mr New York has just wrapped up shooting for a film in which he plays the lead role for the first time.Dokpatsang has a long standing bond with Karnataka, having visited it many times before. The bond just got stronger as most of the shooting for the film New York Police Officer and The Monk was done in locations across Karnataka including Hubbali and Karwar. Dokpatsang has been a bodyguard for the Dalai Lama on a few occasions in India and the US.
Dokpatsang has acted in a few Hindi films before, including Talaash with Akshay Kumar, Qayamat with Ajay Devgan and Janasheen with Feroz Khan.In the Police Officer and The Monk, being made in English, Tibetan and Hindi, Dokpatsang plays a cop from America who comes to Karnataka for "soul searching." He meets a monk and his life changes. The shooting for the film was wrapped up a few days ago. In Bengaluru before going back to the US, Dokpatsang spoke to Mirror. "Bengaluru and Karnataka is another home for me. Just like His Holiness Dalai Lama, I have a deep connect with Karnataka and also Bengaluru. Though I have visited the state many times before, I find something new each time. This time during shooting, I found many new places near Hubballi and Karwar. My inlaws stay in Bengaluru and many people do not know that some part of Janasheen was shot in the city and I stayed in Feroz Khan saab's farm house. I have brought my son along with me for shooting this movie here."

The film is directed by Tenzing Phuljung, an award-winning Tibetan filmmaker living in India. Dokpatsang has multiple national identities. "I am a Tibetan. I was born in India (Darjeeling) and they call me Hindustani.I have a US citizenship and I represented Nepal in SAF Games on the insistence of the then prince of Nepal who was my friend. But my life's mission is to inspire the Tibetan youth. The Dalai Lama has advised me to help youngsters with my expertise and I do everything possible in that direction."

Dokpatsang is the first Asian to win the Mr New York bodybuilding competition."When I visited the venue for the first time, they told me no Asian can have a body like those who were competing.It inspired me to take up bodybuilding and fitness training," recalls Dokpatsang.

Dokpatsang is not too keen on a career only in films. "My son was born when I was offered the villain's role in KKrish 3. I could not accept the film because of that. I am very selective in doing films. There are so many other things to do. The foremost is to inspire young Tibetans and Indians."

11:32 AM
•
movie
Indian Gorkha Geetanjali Thapa's "Liar's Dice" has been selected as India's entry to the Oscars in 2015. 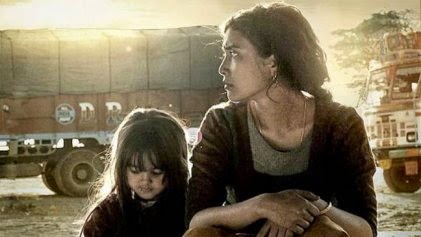 National award winning film "Liar's Dice", directed by Geetu Mohandas, has been selected as India's entry to the Oscars for the Best Foreign Language Film category, the Film Federation of India has announced.
Winner of two National awards earlier this year - Best Actress for Geetanjali Thapa (in the picture) and Best Cinematography for Rajeev Ravi, the film narrates the story of a young mother, who migrates to the city in search of her missing husband. The film also stars Nawazuddin Siddiqui.
In a new record, Liar's Dice was selected from a total of 30 contenders, the largest number FFI has ever considered, which included Kangna Ranaut starrer Queen, Hansal Mehta's acclaimed Shahid and Riteish Deshmukh-produced Marathi film Yellow, among others.

12:55 PM
•
movie
Veteran actor and director of Nepali films industry, Bonny Pradhan, is now going to make a comeback in the Nepali film industry after a gap of more than six years with two new movies, which will be shot in America.
Pradhan maybe an unknown entity these days, but he is an artist who has already acted and worked in several popular Hindi movies, such as Safed Haati, Barsaat Ki Ek Raat, Gharwali Baharwali and Pukar, along with Nepali films mainly in the 80s & 90s, including Bansuri, Tilahri and Jhora among others.

Bonny Pradhan is a resident of Kurseong, but for the past few decades he had been living and working in the US, Mumbai and in Nepal.

Before leaving for America, he interacted with local reporters here. Pradhan informed that for the past several years, he also worked at a private company in Verginia, US as a cashier.

Sharing the reason for working in America, Pradhan said around six years ago, he made a Nepali film “Priyatama”, which was predominantly shot in Sikkim. However, the film had to be cancelled following threats and extortion calls from the Maovadi in Nepal. Following the debacle, Pradhan moved to the US and started working there. He also screened a Nepali documentary movie in the US, which led to the idea of making the two Nepali movies. On being asked why he wishes to shoot the two movies in the US, he said, “There are many Nepali people in the US, who are eager to show their talent. I am helping them get a platform to showcase their talent.”

“One of the movie is based on Lord Buddha and another is based on a Sherpa mountaineer, who conveys a message that mountaineers are not greedy for money and fame,” he added

He also emphasized that even though he had kept himself isolated from making films in the past six years he had never forgotten his friends and well wishers in Nepal and Mumbai. This is the reason, he had visited the two places frequently despite being in the US.

Cinematographer Binod Pradhan to debut as director with Wedding Pulao

The film, which launches Anushka Ranjan in the lead, goes on floors mid-September and will be shot at exotic locales. Binod says, "It's a tale of young love and friendship with a blend of promising fresh talent. The newcomers have been trained at The ITA School of Performing Arts, with an assembly of veterans like Rishi Kapoor, Satish Kaushik, etc."

Director Rakeysh Omprakash Mehra, who has worked with the cinematographer on RDB and BMB, says, "Movies that we've done together have gained cult status. He has been my companion in everything from structuring to shooting, from screenplay to the final edit."

Adds director Rajkumar Hirani, who has collaborated with Binod on Munna Bhai MBBS, "I've always wondered why he has never directed a film. He is not just a great cinematographer, but also a great storyteller who understands cinema deeply."

‘Wedding Pulao’, which is a story about young love and friendship, will be shot at several exotic locales of India and abroad. Filmmaker Rakeysh Omprakash Mehra, who has worked with Binod in ‘Rang De Basanti’ and ‘Bhaag Milkha Bhaag’, was happy for the cinematographer to have taken to direction. Even Rajkumar Hirani, who was associated with Binod for his debut movie ‘Munnabhai MBBS’, was full of praise for Binod’s vast and deep knowledge of cinema.
READ MORE

8:54 AM
•
TV News
The Gorkhaland Film and Television Organisation has expressed their heartfelt condolence on the demise of noted Nepali actor Krishna Shrestha. The GFTVO convener Vikram Parajuli through a press release said the untimely death of Shrestha has created a huge dent in Nepali cini world. “He has been a great contributor to Nepali film industry since the 1980s and has acted in a number of films. He will always be remembered and we send our condolences to the grieving family in this time of sorrow,” Parajuli stated.

10:51 PM
•
movie
Former beauty pageant contestant Sagarika Chhetri from Darjeeling hill will make her acting debut with `Fun Freaked Face Booked`, and she is looking forward to the journey.

Sagarika, who participated in the 2013 Femina Miss India contest and had been awarded the Miss Glowing Skin title, was pleasantly surprised to land a part in the movie.
`Fun Freaked Face Booked` is about social media addiction and the model-actress readily agreed to be part of the project after reading the script.
Sagarika is not new to the camera. She had earlier featured on TV to host a music request show.