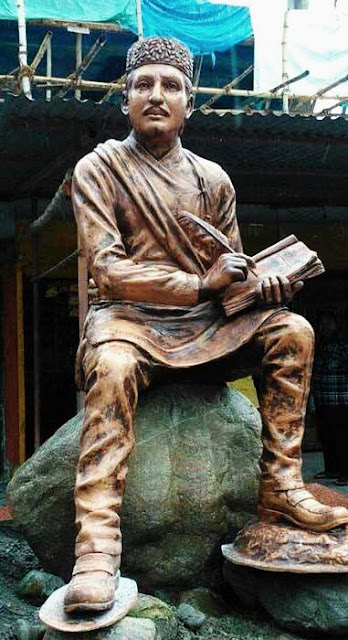 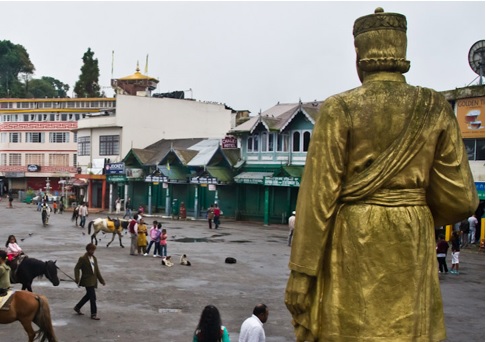 Manoj Bogati in his address described the book as a progressive and factual representation of words against the system. He said the poems in Lohagun’s book talks about social changes and development. “Sankee Samay is an anthology for the new generation as it trends along the current times and has set a starting milestone for the genre,” Bogati added. Poet Raja Puniyani spoke in length about current Indian Nepali writing style and its attributes.

The idea to “create” poetry is an innovative one for the hills, one that could perhaps carve the way for others to follow suit. But Nima’s achievement, gained through hard work and dedication, is not without its critics, with the principal one being none other than his father who labours in his field from dawn to dusk.

“We used to shoot for the ‘poetry’ even late at night in order to perfectly blend my poem with the visual presentation, which annoyed my father. He even called me mad,” Nima told the audience comprising poets, writers, journalists and students.

‘Gaon Ko Katha’ was presented by the Darjeeling Press Guild in collaboration with the Mass Communication and Journalism Department of St Joseph’s College, Darjeeling.

Nima is a lecturer at the Ghoom-Jorebungalow Degree College and writing poetry in innovative ways is a ‘mantra’ he wants budding talents to inculcate.

“I interacted with several poets in Nepal and came to know that only a few of them had ever tried writing poetry using audio and still pictures. That was when it struck me to do something different, and the idea of a visual format was born,” he said, while giving credit to the music arranger and his cameraman friends, who had toiled even harder to create the ‘piece’ Nima had envisaged.

“Initially I was skeptical about how the work would come out. I was not sure about how synchronising the music and visuals of the village with my words would go. But all credit to the music arranger and cameramen for the end-product,” said an elated Nima, who shot all the visuals at his native Rampuria village in Takdah.

The poet also unveiled a short selection of poems from his ‘Kurup Phool Ko Gandh’, which was released in Nepal a week ago and will soon be available in the Darjeeling hills.

The audience was also treated to a 40-minute documentary titled ‘Paper Boat’ created by the students of the mass communication department. This was followed by poetry recitals by five poets invited especially for the programme.

12:59 PM
•
Politics
A promise made by the chief minister three summers ago that stayed unfulfilled today bared the change in relations between the Gorkha Janmukti Morcha and the state government.

The Morcha wasted no time in pointing out that Mamata Banerjee had not kept her promise of a state-wide celebration of Adi Kavi Bhanu Bhakta Acharya’s 200th birth anniversary that was today.

In 2011, two months after Mamata Banerjee came to power in Bengal, she sent an emissary to Darjeeling on the 197th birth anniversary of Bhanu Bhakta, whom hill people revere.

In the letter that theatre personality Bibhash Chakraborty brought to Darjeeling on July 13, 2011, Mamata had written: “I am pleased to announce that the 200th birth anniversary of Bhanu Bhakta in 2014 will be celebrated in the state with due respect and enthusiasm.”

Exactly a year later, Mamata herself went to Kalimpong in July 2013 and garlanded a picture of the Adi Kavi. Her relations with the Morcha were good then and there was hope in the region with the new set-up of the GTA about to take charge.

“I couldn’t come last time on this occasion but had sent my representative. This time I planned my North Bengal tour in such a way that I can be here on this occasion,” Mamata said at the event.

Today, on the 200th birth anniversary of Bhanu Bhakta, Morcha leader and GTA Sabha member Binay Tamang said: “She seems to have forgotten her promise but we will never forget our luminaries.”

Bimal Gurung, the Morcha chief and chief executive of the GTA, was present at the event at Gorkha Rangmanch Bhavan but he did not speak.

Between 1985 and 2011, no Left government marked the birth anniversary of Bhanu Bhakta, perhaps wary of Subash Ghisingh’s disinterest in the poet.

The government’s move to mark the anniversary of the late poet was revived because of Mamata, who then often said she would make the hills like “Switzerland”.

But her hill bonhomie ended on January 29, 2013, when she told a public meeting in Chowrasta that Darjeeling “is a part of us”, triggering protests.

More statehood protests by the Morcha followed after the former UPA government decided in favour of forming Telangana. In order to stop the Morcha agitation, ten GTA members and hundreds of the hill party’s supporters were arrested last year.

In the Lok Sabha elections, the Morcha was miffed that Trinamul had fielded Sikkim-born footballer Bhaichung Bhutia for the Darjeeling seat, and not a local face. It supported the BJP, a party which favours the creation of smaller states, but which has spelt out nothing clearly on Gorkhaland.

Today, Speaker Biman Banerjee said the birth annivarsary of Bhanu Bhakta was observed in the Bengal Assembly. Tamang today did not say anything about statehood, probably because it was a GTA event.

Kalimpong MLA Dr. HB Chettri was also present in the meet today. Having kept his writing passion on the shelves due to his political commitment, Dr. Chettri said he has returned back to writing. “It is important to conduct such interactive programme between writers from India and Bhutan and I hope to attend more such programmes in the future,” he added. Dr. Chettri also recited one of his poems.

Chapagai said only the poets who are true to themselves will become immortal through their writing. “A real poet is a real human being and only he has true dreams. It is the responsibility of every poet to keep the passion alive and help the upliftment of Nepali literature,” he stated. He observed poets from both the countries write in the same language and the expressions are similar. Therefore more programmes like these between the countries should be given priority and said his organisation has always shown such commitments and continue in the future. 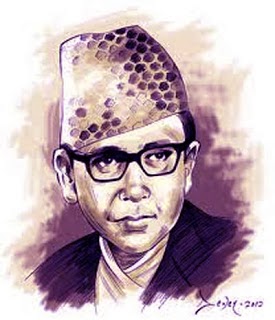