7:40 PM
•
result
Congratulations to Ms. Priyanka Panthi a student of DAV Public School, Dehradun for scoring a perfect 10 CGPA in her CBSE Board exams.She had prepared by her own self study at her home, by studying regularly for 5-6 hrs at home.. growing up she wants to pursue a career as a Chartered Accountant and "will prepare for C.P.T (Common Proficiency Test) from class 11 onwards..." she added


What gives us hope is that, even though she wants to be a CA, but she also wants to work for our GORKHA samaj in its overall development... and has made education her priority to achieve her goals.

When we asked her if she has any message for our youths, she said, "I want to request our Gorkha Samaj across India, especially youth that Education is the tool for Gorkhaland by which whole world can be conquered and demand of Gorkhaland will become successful... Only youth can bring this change"

We are PROUD of you Priyanka and CONGRATULATIONS to You for upholding the Gorkha name.

Darjeeling, May 20: In a span of five years, Gorkha Janmukti Morcha's winning margin has come down by more than 50 per cent but the party says its not unduly worried.

"Whether we win by one vote or by one lakh votes, an election win is a win," said Morcha president Bimal Gurung.

The three Morcha candidates, Amar Singh Rai from Darjeeling, Rohit Sharma from Kurseong and Sarita Rai from Kalimpong, definitely won their seats by more than one vote, but five year backs, the party had won each seat by one-lakh margin.

The victory margin dropped by nearly 90 per cent in Kalimpong. "This is not 2011 and anti-incumbency has definitely come into play," said a Morcha leader.

Right from 2014 Lok Sabha election, consolidation of opposition votes had started. In the Parliament elections, the GNLF had joined hands with the Trinamul Congress similar to this year, and Mahendra P. Lama, who is now with the Jana Andolan Party, was also in the fray.

"This year, we had to brave everything, right from consolidation of opposition votes to support from development boards and then the use of district demand for Kalimpong against us. In the coming elections, these calculations will not hold true as election equations will be different," said Gurung.

He said: "We will, however, do all that is needed to address the grievances of the public even if that means making changes in the leadership."

The Morcha will have to face the civic polls later this year and the all-important GTA elections in July next year. "Four issues were instrumental in bringing the victory margin down. While anti-incumbency factor is one reason, the other reasons were formation of development boards, consolidation of opposition votes and the district issue in Kalimpong," said an observer. 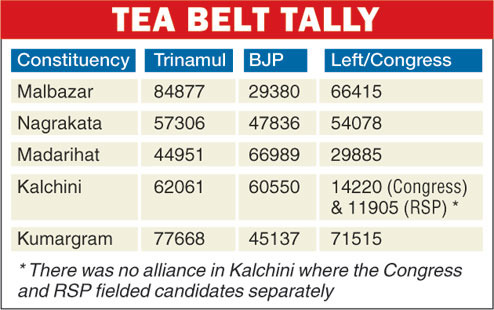 Mamata Banerjee's Trinamool Congress' might have swept West Bengal but it failed to dislodge the Gorkha Janmukti Morcha (GJM) in the Darjeeling hills. Despite Banerjee's attempts to gain a foothold in the hills, the GJM won all 3 constituencies in the area - Darjeeling, Kurseong and Kalimpong.

The message from the Darjeeling hills is loud and clear - the appeal for Gorkhaland is very much alive. Mamata's rigidity on the Gorkhaland issue has once again led to a near boycott of the TMC in the hills.

Roshan Giri, General Secretary of the GJM, spoke to Catch from Darjeeling.

"We were extremely confident of retaining all the 3 seats in the hills. And that is exactly what happened. We are extremely happy with the results and that people still have faith in us. People are very firm on their appeal for the state of Gorkhaland and they know we are the only party that can help them get there," he said.
- Amar Singh Rai of the GJM defeated TMC's Sarda Rai Subba in Darjeeling by 49,441 votes.

- Rohit Sharma of the GJM won the elections from Kurseong for the second consecutive time, this time defeating TMC's Shanta Chettri by 33,726 votes.

While TMC decimated the opposition in the rest of Bengal, the party's promises of development fell on deaf ears in the hills. The party was unable to create a strong opposition to the GJM and the candidates' silence on the Gorkhaland issue evidently worked against them.

The demand for a separate state continues to be the most important factor and the distrust towards Bengal parties continues.

The decimation of TMC in the area is also an indirect win for GJM's ally - the BJP. The BJP won from Darjeeling in the 2014 Lok Sabha elections by allying with the GJM.

The 3 seats won by the GJM gave a sense of respectability to the BJP-led alliance in what was otherwise a mediocre performance in West Bengal. BJP could win only 3 seats in the rest of the state.

Interestingly, the CPI(M) indirectly lent support to the GJM by not putting up any candidates in the hills and asking their supporters to vote for the GJM. The Gorkha National Liberation Front's (GNLF) support to the TMC evidently did not have any effect. Shanta Chettri, a 3-time former GNLF MLA from Kurseong was comprehensively defeated by Rohit Sharma of the GJM.

Harka Bahadur Chettri, former GJM MLA from Kalimpong quit the GJM after being asked to resign from the state government in 2015. He continued his tenure as an independent MLA. Chettri founded his own party called the Jan Adolan Party (JAP) in Kalimpong in early 2016.

Chhetri was initially nominated as a TMC candidate - Mamata Banerjee had announced his name in the TMC candidate list in February. But he quickly clarified, saying that he would fight on a JAP ticket. TMC's backing however proved to be a deal breaker for Kalimpong voters who had otherwise voted for him the last time around.

The appeal of Gorkhaland is a sentimental one. GJM has used this sentiment to their advantage time and again.

Two things remain to be seen in the near future. First, how Mamata Banerjee deals with the Darjeeling hills in her second term as CM, especially given the manner her party has been rejected in the region. Second is whether the GJM is able to leverage its alliance with the BJP at the Centre to push for a separate state,

Gorkha Janmukti Morcha Win is a Mandate for Hill Unity

9:02 AM
•
TMC
Darjeeling, Kalmpong and Kurseong 19th May 2016 The Gorkha Janmukti Morcha has won all the three seats from the three constituencies in the hills, defeating the allied forces of the Jan Andolan Party, the Trinamool Congress and the Gorkha National Liberation Front. However, the victory margin was a far cry from what the party had achieved in the 2011 Assembly election.

- In Kurseong, GJM candidate and former MLA Rohit Sharma got 86,947 votes as against 53,221 polled by TMC candidate Shanta Chhetri, with the win margin standing at 33,726 votes.

- Kalimpong witnessed a close fight between GJM candidate Sarita Rai and JAP president Harka Bahadur Chhetri, with the former garnering 67,693 and the latter 56,262 votes. Rai managed to win by a margin of 11,431 votes.

Thursday evening saw euphoric scenes in Darjeeling, Kalimpong and Kurseong as GJM supporters who had gathered near the counting centres started singing and dancing after the results were announced. In Darjeeling, GJM supporters burst firecrackers and distributed sweets. In Kalimpong, GJM president Bimal Gurung walked nearly 2km from the counting centre to Dambar Chowk distributing sweets, and in Kurseong, GJM supporters gathered at the railway station to celebrate and savour the moment of victory.

The GJM welcomed the victory but party leaders appeared a bit thoughtful with the margin of win as in the previous election, each party candidate had won resoundingly over their rivals, by at least 1 lakh votes. The GJM president though reacted realistically to the outcome saying there were several things to be addressed. “We were confident about our victory as the people are with us. A win is a win nonetheless irrespective of the margin. However, we will definitely identify our lapses and mend them,” said Gurung in Kalimpong.

The GJM chief also congratulated TMC chief Mamata Banerjee for retaining power and expressed hope that the two sides could work together for the welfare of the hill people. Meanwhile, Chhetri, the JAP candidate and party president, expressed optimism at the outcome. “In such a short span of time we have received good response from the people. We could have fared better had the election been conducted fairly. However, our party was not formed for elections and as such we will continue to work for the people,” Chhetri said, adding his party would contest all elections in the hills henceforth.

Amar Singh Rai said, “We respect the decision of the people but we have observed that votes in favour of the opposition have increased in comparison to previous polls.” Political observers said the lower victory margin for the GJM was the outcome of several factors and it has cast a shadow on the GJM even in victory. “Overall, the GJM’s vote bank was affected by the formation of the community development boards and the TMC-JAP- GNLF alliance. In Kalimpong, the JAP played the separate district card to their advantage and managed to snatch votes,” an observer said.

Ganesh Limbu (BJP) from Barchalla Constituency of Assam
Congratulations to Ganesh Limbu of BJP for winning from Borsala constituency by a huge margin of 23682 votes. Now Assam Assembly have 2 Gorkha MLAs.Tanka Bahadur Rai for Indian National Congress got 30230 vots from the constituency.

GJM‬ candidate Sarita Rai with 67693 votes Won by 11431 vote at ‪Kalimpong‬ Constituency where she had to face a tough fight from former MLA Dr Harka Bahadur Chettri Jan Andolan Party ( JAP) with around 56262 votes.

Similarly, In Kurseong  Dr. Rohit Sharma was able to retain his Legislative Assembly seat. Dr Sharma got over 86947 and comfortably won by 33726 votes. Shanta Chhetri for All India Trinamool Congress got around 53221 votes from the constituency.

The tie up of GJM & BJP secured the alliance a total of seven seats in West Bengal, the best so far for BJP in the state. While BJP won Kharagpur and Baisnabnagar, its alliance with GJM sealed the victory in Darjeeling, Kalimpong, Kurseong, Kalchini and Madarihat.