Bangkok: Shiva Thapa (60kg) secured himself an unprecedented fourth successive medal, while veteran L Sarita Devi (60kg) made the semifinals for the first time in nearly a decade to continue India's stupendous run at the Asian Boxing Championships here on Tuesday.

In all, eight Indian boxers -- four women and four men -- advanced to the medal rounds on day two of quarterfinals.

The 25-year-old Thapa defeated Thailand's Rujakran Juntrong in a one-sided lightweight (60kg) contest. He prevailed 5-0 and has a tough semifinal lined up against Kazakhstan's Zakir Safiullin, a silver-medallist from the 2015 edition. 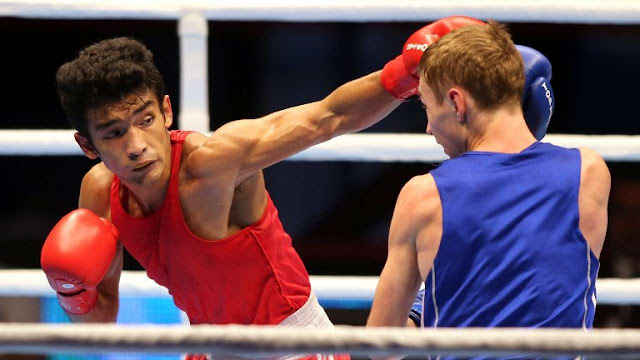 Thapa had won a gold in 2013, a bronze in 2015 and a silver in the 2017 edition of the marquee continental event. He is the first Indian to achieve the incredible feat.

In the women's draw, former world champion Sarita, who last reached the Asian semis back in 2010 and ended with a gold, defeated Kazakhstan's Rimma Volossenko in a split decision to advance.

Ashish Kumar got the better of Kyrgyzstan's Omerbek Uulu Behzhigit in a unanimous verdict, while his namesake trounced Vietnam's Tran Duc Tho 5-0, displaying an impeccable counter-attacking game.

In the evening session, Satish out-punched Korean Kim Dohyeon, an exhausting showdown that left the Indian with a cut above his right eye.

Thapa, who is also a former world championship bronze-medallist and a two-time national champion, opened the proceedings for India and got busy immediately.

The Indian had a spring in his step as he went about dismantling his clueless opponent.

The technically superior Thapa also seemed to have added some more power to his punches and an aggressive streak which his rival found tough to deal with.

Ashish, on the other hand, was locked in a messy contest with Bekzhigit but was clearly the more accurate of the two boxers, finding favour with all the five judges.

Sarita also endured a draining contest against Volossenko but the veteran from Manipur raised the bar when it mattered to move ahead.

The performance in the championship is a turnaround of sorts for the 37-year-old, who ended without a medal at the world championships in Delhi last year.

In the women's draw, it was curtains for Nupur (75kg) after she went down to North Korean Pak Un Sim in her quarterfinal bout.

It was a great pleasure to meet the pride of Northeast from Sikkim, National Chess champion, Sushmita Lama, who is also a student of the Central University of Sikkim. Lama recently achieved 2nd position in 19th National Cities Team Chess Championship 2018 organised by Darjeeling Chess Association whereby she also qualified for Asian level championship.

Sushmita has a slate full of memorable victories. She defeated the chess champion of Nepal Bhupendra Nirola in 2016 in Gangtok. She defeated Anish Gandhi another well known Indian Chess Champion in 2014 from Delhi.

Sushmita has been participating in various Chess Championships since she was studying in Class Seven. She has participated in many tournaments across the nation. In Under 15 Championship held in Tripura, she achieved 2nd position in the entire North East. In the 6th North East under 19 Championship held in Imphal in 2013 she was rose as a Champion. In the 15th Parsvnath Delhi International Open Chess Tournament (held in New Delhi she stood third all in all wining the Best Female Chess Player award.

via Voice of Mirik 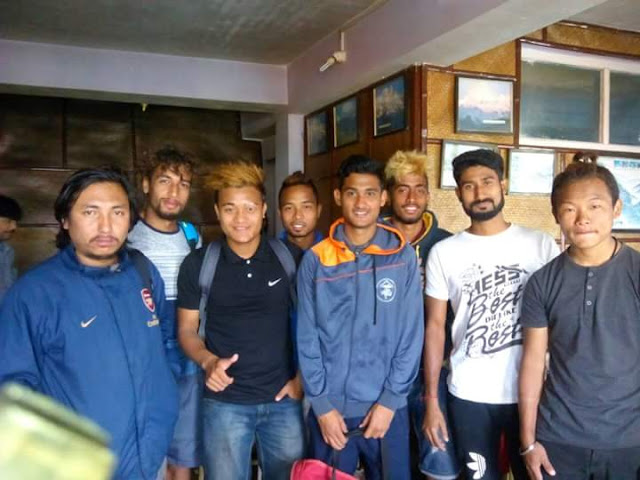 Mitharval, who had established a new qualification record with 584, eventually finished with the bronze medal after aggregating 214.3 in the eight-man finals at the Belmont Shooting Centre.

Australia's Kerry Bell managed to secure the silver medal with 233.5. In the finals, Jitu led with 100.4 at the end of stage 1, while Mitharval was third with 98.1.

In stage 2 elimination, Rai started with 10.3 and 10.3 to lead the pecking order, even as his compatriot moved up and displaced Bell at second place with two 10.1s.

Championship Rai continued to surge ahead with a 10.2 but an 8.4 disturbed his momentum somewhat, as the next shot fetched him 9.2. Meanwhile, Mitharval closed the gap as Rai had just 8.8 in the 18th shot to Mitharval's 10.0.

However, Mitharval slipped after that even as Rai managed another 10.0 and maintained the lead throughout to emerge triumphant. 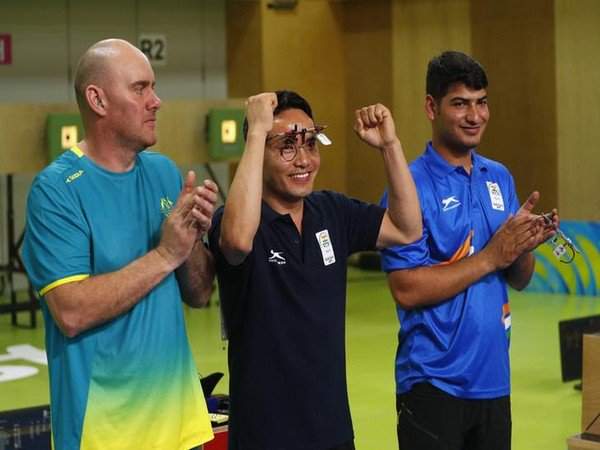 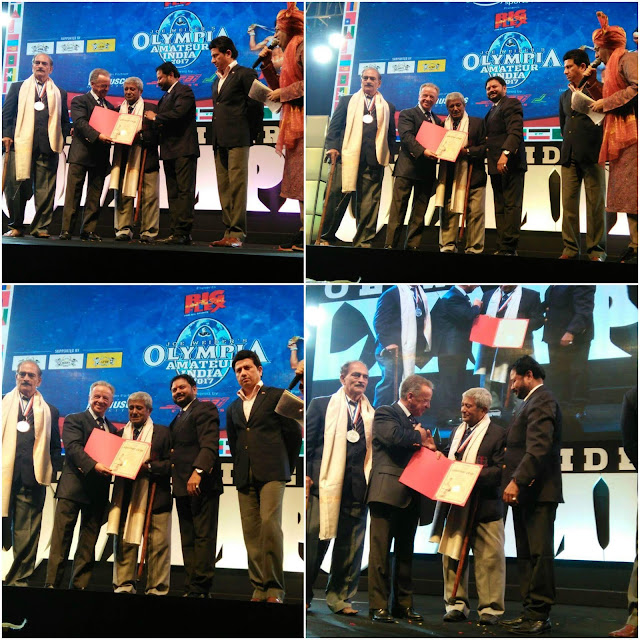 The Medal was presented by the IFBB President Dr. Rafael Santonja as well as Dr. Sanjay More (Hon’ble General Secretary, Indian Bodybuilding and Fitness Federation) at the “Olympia Amateur India 2017” competition which is being held in Mumbai from Oct 13 - Oct 15. 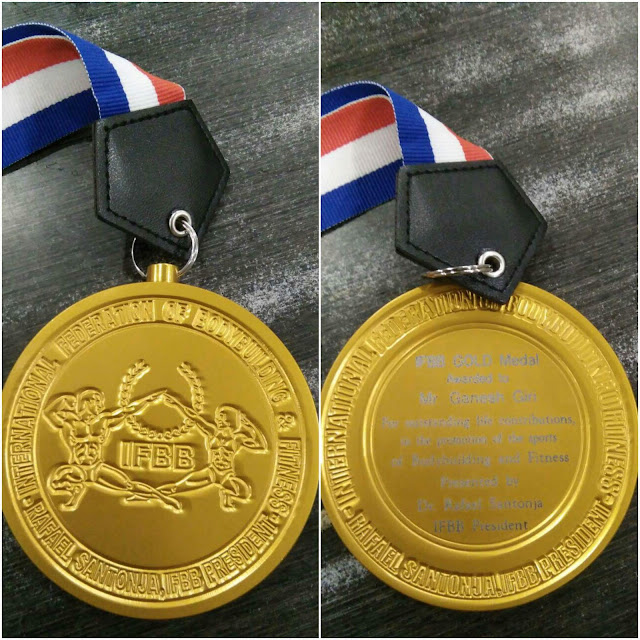 Sunil Chhetri surpassed Wayne Rooney as the current leading goal scorers in the world after his goal against Kyrgyzstan on Tuesday. He now has 54 International goals next to his name while Rooney sits at 53.

India captain Sunil Chhetri became the fourth highest active International player on Sunday after his goal against Kyrgyzstan on Tuesday. He surpassed England football great Wayne Rooney with a goal to sit on the fourth position after Cristiano Ronaldo, Lionel Messi and Clint Dempsey.

Chhetri’s goal against Kyrgyzstan in Bangalore not only helped India win the crucial AFC Asian Cup Qualifier in Bangalore but also increased his greatness quotient for the cricket-crazy country.

The Captain scored the only goal in the qualifier in the 69th minute which ensured India sat at the top of the Group. He made a brilliant run, dribbled past the defence, returned it to a waiting Jeje who fed a decent ball for his skipper. Chhetri, who was waiting in the area,  produced a spectacular goal to give India the lead.

The goal was his 54th strike for India, while Rooney sits at 53. Only football legends Cristiano Ronaldo of Portugal, Argentina’s Lionel Messi and American Clint Dempsey stand ahead of the 32-year-old Chhetri.

While Ronaldo is the current leading goalscorer with 73 goals, the Real Madrid star is followed by rival Messi with 58 goals. With two more goals, Chhetri will stand par with Demsey to become the the highest active scorer only after the two legends Ronaldo and Messi.

Under coach Stephen Constantine, India have also improved their FIFA rankings to stand in the top 100 for the first time in 21 years. 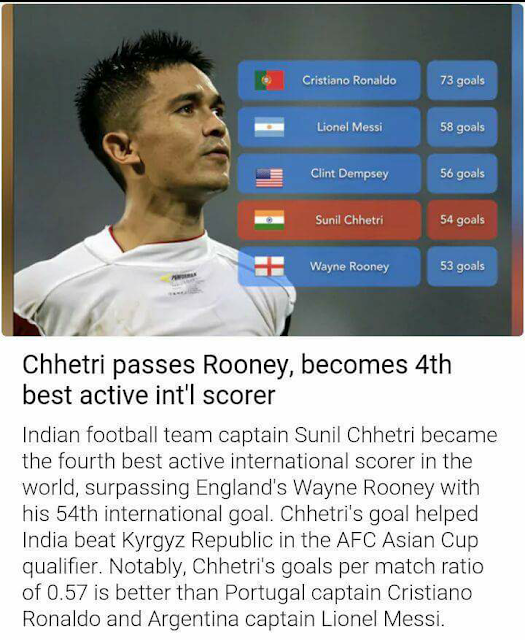 Sunil Chhetri, The absolute Legend.
Oh my God look at those stats. Look at his much superior goal scoring ratio per match.
We are so lucky that Indian football got a player like you. For us you are greatest of all time.

If someone says Messi , Ronaldo, Rooney  played against much stronger opponents to score those goals than our response is , all of them are from strong team themselves and had equally good playmates to assist them. If you have player like Angel de Maria to assist Messi , you shouldn't be complaining and comparing about the opposition. Above it just look at Sunil's Goal scoring Ratio, far better than among top 5. In fact he has highest goal scoring Ratio among top 100 footballing nation.
Admit it all of them are gem of football and Legends. 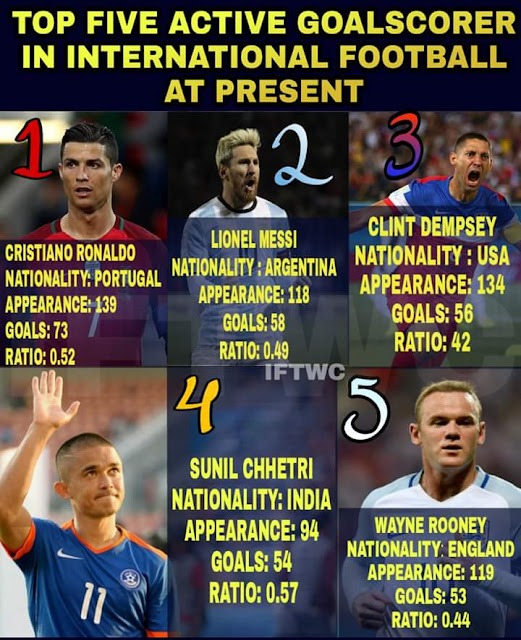 The terms brave, fierce are very much associated with Gorkhas but now the overall scenario is different.

The so called brave Gorkhas can now be considered the modern Gorkhas of the 21st century who have excelled in many aspect whether it be social, economic, political and also at the intellectual level.

As such it is in this context that the name of Jitu Rai who was representing India at the Rio Oympics 2016 will be conferred the Rajiv Gandhi Khel Ratna Award 2016, the highest sporting award in the nation

Not only him Shiva thapa who represented India in Boxing will be conferred the Arjuna award 2016 which is really a moment of pride for the entire Gorkha community.

So we the Gorkhas must be proud of their achievement since we have always been discriminated racially. This is an example where we Gorkhas stand now and we will even be progressing further in near future.

In the process, we also Congratulate our local lad from Siliguri Soumyajit Ghosh who is also receiving Arjuna Award this year.

Congratulations to all the Athletes and Coaches.