8:40 PM
•
tribal news
Darjeeling: BJP MP S.S. Ahluwalia has written to the Union tribal ministry pressing for inclusion of 11 Gorkha communities in the Schedule Tribal list, the move coinciding with the rural polls in the Bengal.
The letter written by Ahluwalia is dated April 25, 2018, but it was posted by Gorkha leader Roshan Giri on social media on Tuesday. The BJP had used the tribal card effectively in earlier elections.
The Darjeeling MP has justified his decision to write the letter now saying the term of the committee constituted by the Union tribal ministry to look into the demand ends in May this year. 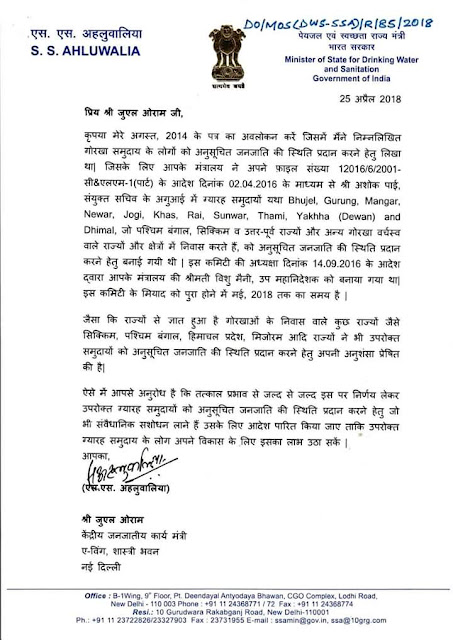 Centre to accord tribal status to the Gorkhas - Tribal Minister

The Centre is eager to accord tribal status to the 11 Gorkha communities, but some technical problems are holding it back for now, Union Tribal Affairs Minister Jual Oram said in Kalimpong on Sunday. “The central government is pursuing the demand for tribal status for 11 Gorkha communities with all sincerity. But, we have to follow the established norms and procedures to get over some technical problems,” Oram told reporters in this hill town.

“All the 11 Gorkha communities seeking tribal status are living in almost all states of the country. For that, the tribal department needs to take inputs from the states concerned and consult other departments involved. That is why the issue is pending,” he said.
“I want all Gorkhas to know that the Prime Minister has already promised that the status will be accorded, so there is no room for doubt. People should not worry unnecessarily,” the minister said. To a question, he said the West Bengal and Sikkim governments had already issued recommendation for these communities. 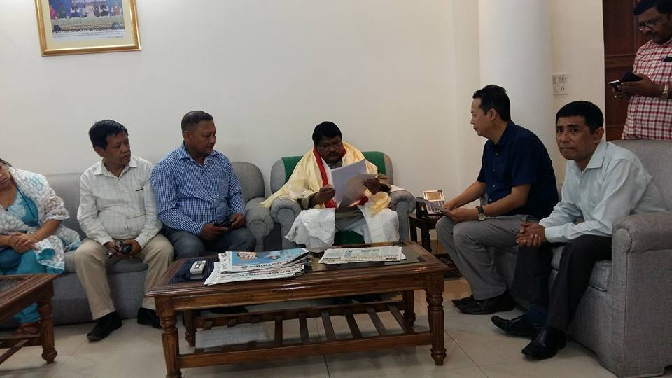 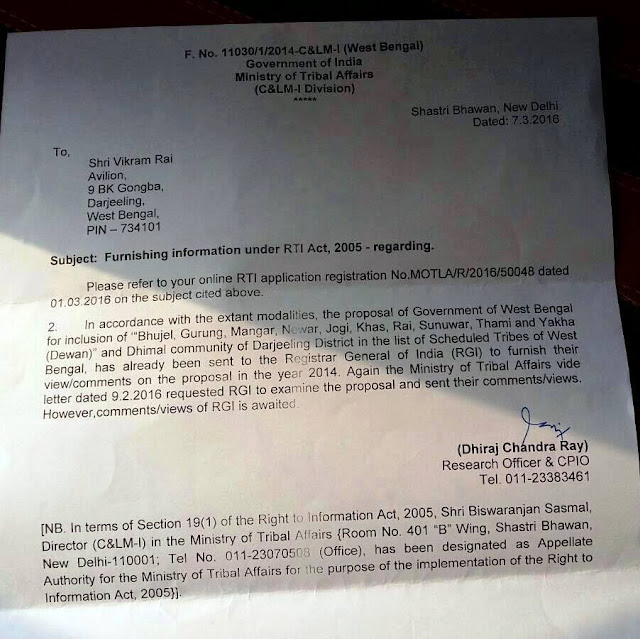 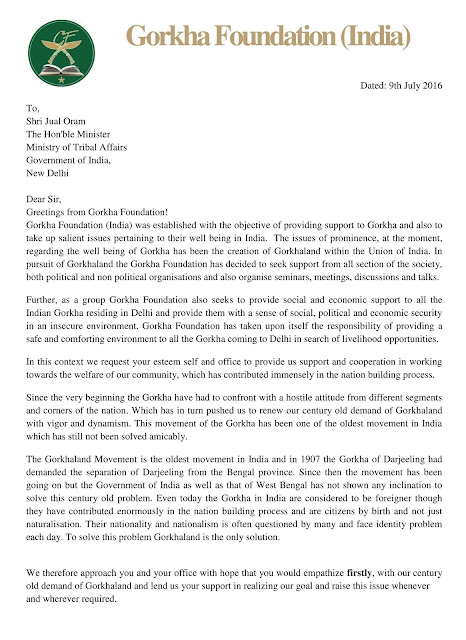 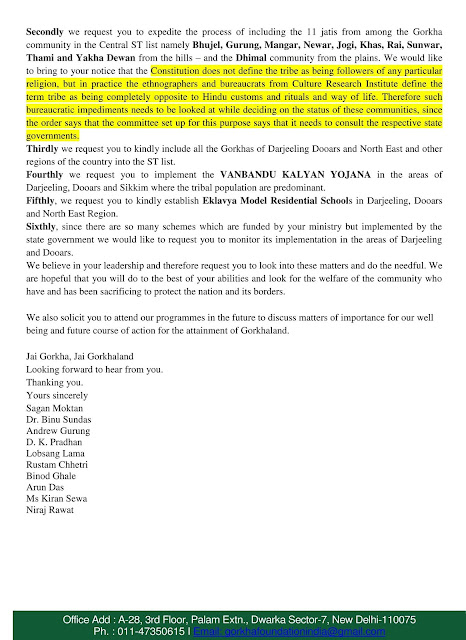 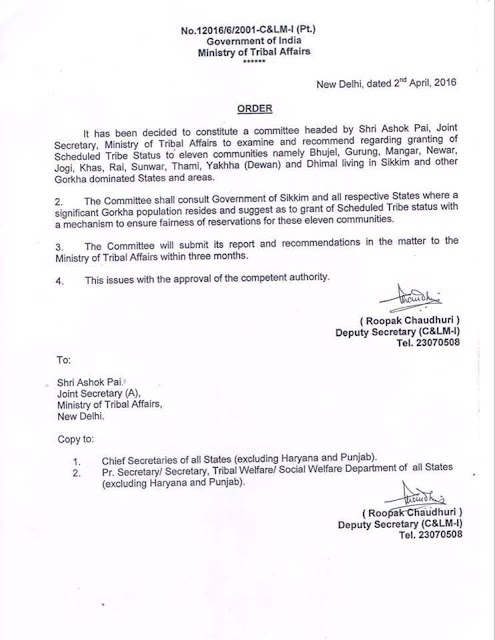 TMC, GJM war over ST status demand - All you need to know

11:34 AM
•
tribal news
Darjeeling 3 Jun 2016 Fresh from their victories in the just concluded state Assembly election, the Gorkha Janmukti Morcha and the hill Trinamool Congress has embarked on a war of words over the issue of granting Scheduled Tribe status to the 11 communities of the hills.

The hill TMC organised a victory celebration and a public meeting in Darjeeling where its leaders accused the GJM of hoodwinking the people over the issue by claiming Prime Minister Narendra Modi had endorsed its demand. Sardha Subba, the Darjeeling TMC candidate for the Assembly election and the hill Trinamool Mahila Congress president, said that according to a Press Information Bureau report released on Thursday, the Union Cabinet chaired by Modi on May 25 approved of the introduction of two Bills relating to the issue of granting tribal status to various communities in five states. According to the PBI report, the Cabinet has given ex-post facto approval to the amendments in the Constitution (Scheduled Tribes) Order of 1950 to modify the list of Scheduled Tribes in the state of Assam, Chhattisgarh, Jharkhand, Tamil Nadu and Tripura and the Union Territory of Puducherry.
“The GJM claims the matter has been taken up by the PM himself and it is in the implementation stages. But the PBI report clearly shows that even though five states and a Union territory are mentioned, the demand from Darjeeling has been left out. This shows the GJM is playing with the sentiments of the people and fooling them for political interests,” said Subba today in the public meeting. The Prime Minister, campaigning in May for north Bengal BJP candidates in Siliguri, said the process of granting tribal status to the 11 communities had already been initiated and that a committee already been formed to look into the matter. The GJM wants the 11 communities to be brought under the ST list.

The communities from the hills are Bhujel, Gurung, Mangar, Newar, Jogi, Khas, Rai, Sunwar, Thami and Yakha Dewan, and the Dhimal from the Dooars. Meanwhile, the GJM disagreed saying the Union Cabinet’s approval to place two Bills for the five states as reported by the PBI and its demand were in different stages. “She (Subba) is not aware of this. Committees were formed in 2013 for the five states and the UT, and based on the recommendations of those states, relevant Bills have been placed before the Cabinet. However, in our case, a committee was formed only this year, hence it did not find mention,” countered Binay Tamang, the GJM assistant secretary.

All the same, he expressed happiness that the Cabinet had approved the introduction of two Bills for amendment, saying this would set a precedent. “When the Bills get amended, they will become the basis to facilitate the Centre to take up our case,” Tamang said. The GJM leader furnished an order issued on April 2 by deputy secretary of the Union tribal ministry Roopak Chaudhuri to the chief secretaries of all states, excluding Haryana and Punjab. The order states the tribal ministry has decided to constitute a committee headed by Ashok Pai, joint secretary, Union ministry of tribal affairs, to examine and recommend granting of ST status to 11 communities living in Sikkim and other Gorkha dominated states and areas. 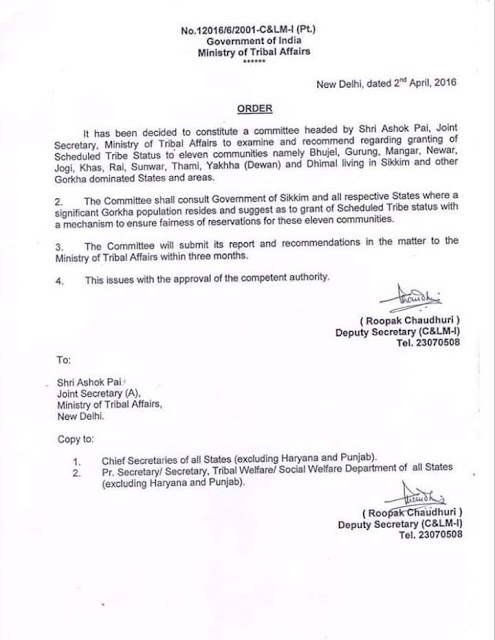 As per the order, the committee will have to consult with the Sikkim government and the states with significant Gorkha populations and submit its report to the tribal affairs ministry within three months.

"The statement issued by Sharda Subba Rai, the Trinamul candidate who lost the recent Assembly election from Darjeeling, clearly suggests that she is unaware of the developments over the tribal status issue. It is also very clear that she has not consulted senior Trinamul leaders and we suggest that she be clear on an issue that is as important as granting tribal status before making any comments," said Binay Tamang, assistant general secretary of the Morcha.

The Morcha was reacting to Subba's charges that the hill party and its ally at the Centre, the BJP, were not sincere on the tribal issue.

"On May 25, the Union cabinet chaired by Prime Minister Narendra Modi gave its approval for the introduction of two bills in Parliament to modify the list of Scheduled Tribes in five states - Assam, Chhattisgarh, Jharkhand, Tamil Nadu, Tripura - and identification of new communities in the Union Territory of Puducherry," Sharda Subba said had said.

Five communities from Chattisgarh, two each from Assam, Jharkhand and Tamil Nadu and one each from Tripura and Puducherry have been identified, the Trinamul leader had said.

"The Morcha is an ally of the BJP but there was no mention of a single community from the hills. This clearly proves that both the Morcha and the BJP are not sincere about the demand and are only using it as an election plank as municipal polls are due this year and GTA elections next year," Sharda Subba had said.

Tamang today said: "On April 2, the Centre formed a committee to look into the demand of granting ST status to 11 communities. Whereas in the case of the committees that were recommended on May 25, such a committee had been formed in 2013. It is after the report of the 2013 committee that the Centre is now preparing to place a bill in Parliament. Our case is different as the committee has only been formed now, that too because of our incessant pressure, and we are confident that the recommendation from this committee will be favourable for us," said Tamang.

"The developments clearly suggest that Sharda Subba Rai is confused on the issue," said Tamang.

10:16 AM
•
tribal news
Darjeeling 29 May 2016 The youth wing of the Gorkha Janmukti Morcha (GJM) today said it will hold a mass rally on June 2 to push for the demand of granting Scheduled Tribe status to the 11 communities of the hills and the plains of Siliguri.

The Morcha got a boost to its demand after Prime Minister Narendra Modi endorsed it during an election campaign for party candidates in the north Bengal region recently. Earlier this year a committee was also formed by the Union Ministry of Tribal Affairs to examine and make recommendations.
“The PM has given a positive response to our demand. A committee has also been formed by the central government. It must be remembered that we are demanding for ST status and therefore, we must take proactive steps to pursue the issue,” said Sanjeev Lama, the GJYM general secretary, today.

The state government too had recommended the inclusion of the 10 hill communities under the tribal status category. At present, the Bhutia, Sherpa, Yolmo, Lepcha and Tamang come under the Scheduled Tribe status. The Bharatiya Gorkha Janjati Sangarsha Mahasangh (BGJSM), an umbrella organisation of the communities demanding tribal status, too has been pursuing the issue with the central government. After the Centre’s initial nod to look into the issue, the Mahasangh has started a mass signature campaign to garner support and make people aware of the demand.

“We Gorkhas have faulted on many occasions with our various demands because of disunity. But the time has come to work together and take forward this demand to its end,” said Amrit Yonzon, the youth front’s spokesperson.

GJM and JAP on agitation path to protect their support base

May 30: After a bitter and hard fought-Assembly election, the Gorkha Janmukti Morcha and its rival, Jana Andolan Party, are now busy protecting their support base and are on the path of agitation in the hills less than a month after the poll.

Four days after the poll results were announced, the JAP started a relay hunger strike at Tricone Park in Kalimpong from May 23 demanding streamlining of water distribution system in town. The party has threatened to intensify the protest if the problem is not resolved by the public health engineering under the GTA and the residents are not given water on a regular basis.

"We are likely to continue the dharna for some more time since the administration has done precious little to resolve the problem," said Nayan Pradhan, JAP secretary.
The JAP is at present holding meetings at block and village levels to chalk out its future programmes.

The Morcha, too, has decided to launch an agitation to demand land rights to people living in tea gardens and cinchona plantations and tribal status for 11 hill communities.

Suraj Subba, the general secretary of the Janmukti Parcha-Patta Sangharsh Committee, said: "We have decided to hold gate meetings in front of all 87 tea gardens in the hills and in the cinchona plantations on June 13 for an hour before the start work. This is the start of our agitation and we will vigorously pursue our demand."

The Morcha's youth wing, the Gorkha Janmukti Yuva Morcha, has also decided to hold a rally in Darjeeling on June 2 to seek tribal status for 11 hill communities.

"The rally will start from Darjeeling Motor Stand and wind its way to Chowrastha," said Amrit Yonzone, the spokesman for the Yuva Morcha.