A great Indian  Gorkha Freedom fighter Saheed Durga Malla was hanged to death by the British on 25th August 1944 for his patriotic activities. 25 August is observed all over the India by Gorkhas as BALIDAN DIWAS and we pay our homage to Saheed Durga Malla and several others who laid down their lives for securing freedom to our country. 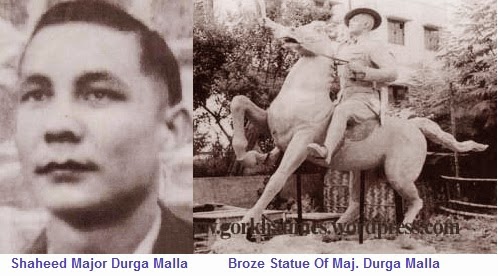 Countless Indian Gorkhas have fought and made sacrifices for our beloved nation. From the freedom struggle to the heights of Kargil, Gorkhas have always been at the forefront in the defence of our country. Shaheed Durga Malla belongs to the front rank of Gorkha heroes martyred for the cause of our country’s freedom. He epitomized the fighting spirit and ardent patriotism of Indian Gorkhas.

His Family and Early Life
Born on 1 July 1913 at village Doiwala in Dehradun district of Uttaranchal, Durga Malla was the eldest of the four sons of Parwati Devi and Ganga Ram Malla. Ganga Ram Malla was Jamadar (now called Naib-Subedar) of Gorkha Rifles in the Military and Parwati Devi a housewife. With the passage of time, this family was blessed with three more sons and three daughters. The eldest among the four brothers, Durga Malla was an extremely self-respecting, laborious, dedicated and honest person. 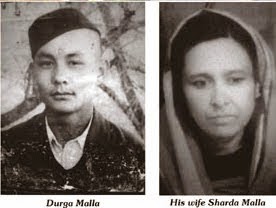 The ancestors of Durga Malla had been living in Doiwala area since the eighteenth century. Their main was agriculture and service in military forces. Growing sugarcane crop, preparing “gur” and sugar; and selling them in the market was also part of their profession

Since his childhood, Durga Malla was different in nature from other children of his age . Besides having a keen interest in sports, particularly football, Durga Malla has a great fascination for literary and social activities. He was very good at studies. But due to the absence of proper educational facilities in Doiwala area, he had to join Gorkha Military Middle School, at present Gorkha Military Inter College, near Dehradun. Since the school was quite far from Doiwala, he shifted to his paternal uncle Kedar Malla’s house at Nalapani. He used to go to school on foot along with one or two of his friends, covering a distance of about 8 or 9 miles everyday. Despite being tired on return from school late in the evening, he never neglected his studies and always stood first in his class.

Durga Malla had drawn inspiration from the poet and social reformer Subedar-Major Bahadur Singh Baral and the musician and playwright Mitra Sen Thapa. He was greatly inspired by the prominent Gandhian freedom fighters of Dehradun like Thakur Chandan Singh, Veer Khadagabahadur Singh Bisht, Pandit Ishwaranand Gorkha and Amar Singh Thapa. The Dandi March of Mahatma Gandhi in 1930 to violate “salt rule” started generating patriotic sentiments in the heart of Durga Malla, motivating him to take part in the freedom struggle. He could see the vision of the freedom of India under the leadership of Mahatma Gandhi.

At the time of the Satyagraha movement, Durga Malla was only a student of ninth class, but he was actively engaged in anti-British activities in his locality. He used to enter the Gorkha battalion area in the night with some of his friends to paste posters of freedom struggle. Sometimes, he participated in processions with freedom fighters. Due to his anti-British activities, his family was frequently subjected to severe interrogation by the British Government.

Durga Malla was in his youth in 1930. He always remained worried and restless at the plight of the Gorkha society. The following lines, composed by Durga Malla and published in the book Thakur Chandan Singh authored by Magan “Pathik” writer -editor and poet of “Bhaksu”, reflect his sentiments and restlessness in his heart for self-respect:

Durga Malla was also deeply concerned about the subjugation of India and the pathetic condition of the country. Therefore, he joined the freedom struggle to free the country from the shackles of slavery. This was the time when the police in Dehradun was frantically arresting freedom fighters. As a result, freedom fighters started migrating to other places from Dehradun. To dodge the police, Durga Malla, who was a young student, went away to the house of a relative at Dharamshala in Himachal Pradesh.

In 1931, when he was only eighteen years old, he joined the 2/1 battalion of Gorkha Rifles. In his battalion, Durga Malla was comparatively a more educated recruit. Therefore, after completing “recruit training”, he was sent to Pune for “signal training”. In the course of time, he attained excellence in several other military trainings. On the basis of his dedicated services and efficiency, he got quick promotions and after a few years, was promoted to the important post of Signal Hawaldar. Broze Statue of Durgamalla In”"1941, after serving the army for about ten years, Durga Malla married Sharda Devi, a girl of Thakuri family of district Kangra, Himachal Pradesh. But fate had something else in store for him. It was the time of the Second World War. Japanese aggression had become more violent in Burma, Malaya and Singapore. The 2/1 battalion of Gorkha Rifles was also ordered to advance for the war- field. Just three days after his marriage Durga Malla got an emergent call from his unit. He was called back for war by the Army even before his newly married bride Sharda Devi could get acquainted with him.

Participation in the Second World War
Being a true patriot, Durga Malla did not get upset while leaving his newly married bride alone back at home. He marched for war with utmost courage. When his battalion reached Secunderabad, he was sanctioned leave for 28 days and given an opportunity to reach home and meet his family members before departing for Malaya. From Secunderabad, his battalion reached Bombay and on 23 August 1941 departed for Malaya from the Bombay sea-port. By September 1941, all the Gorkha battalions had reached Malaya. Following an attack on 8 December 1941 by Japan to the Allied Forces deployed in South-East Asia, the war was declared. By 11 December 1941, the condition of the British Forces weakened. Gradually, Japanese forces tightened their grip over the war. 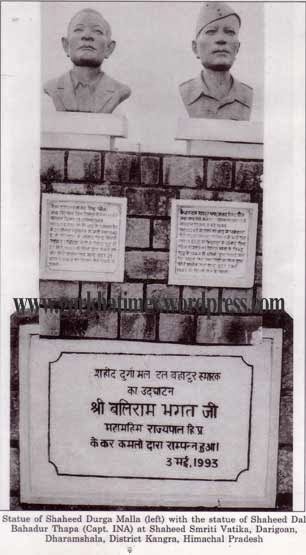 Never before in the history of British rule had the Indian soldiers felt so demoralized as did in Malaya and subsequently at other places in South-East Asia. In December 1941, a group of Indian soldiers lost themselves in the jungle. One of their officers, Captain Mohan Singh decided not to rejoin the retreating British Forces. He convinced himself that Indian soldiers had no cause to fight for the Britishers and instead fight the Britishers along with the Japanese. With this mission in his mind, he approached Major Fujiwara of Japan who assured him that Japan was prepared to go all out to assist India to attain independence. Major Fujiwara also declared that all Indian Prisoners of War, who were handed over to the Japanese Government by a British officer Col.Hunt on behalf of the British Government, would be under the control of Captain Mohan Singh.

At the War Front
When after the formation of the Provisional Azad Hind Government under the supreme command of Netaji Subhas Chandra Bose war was declared against the Allied Forces on 25 october 1943, soldiers of different branches of the Indian National Army were deployed on the fronts. Durga Malla was posted in the Intelligence Branch. He, along with some other fellow soldiers entered the hilly area of the then greater Assam across Burma border.
There he used to collect and send important information regarding matters of strategic importance to the headquarters of Indian National Army in Rangoon despite the shortage of supplies, ammunitions and weapons and adverse geographical conditions. On 27 March 1944, when Durga Malla was on a mission to collect information of the enemy camps, he was captured by the soldiers of enemy side at Ukhrul in Manipur near Kohima.

Prisoner of War and Trial
After his arrest, Durga Malla was kept in the prison at Red Fort, New Delhi as a prisoner of war. He was prosecuted by military court under section 41 of the Indian Army Law and section 121 of the Indian Penal Code. He was given death sentence by the Court Martial, the court of trial before which he was tried at Red Fort. That was the time when the imperialist British rulers were trying to suppress the Indian freedom struggle by all means. Therefore, before the death sentence was finally executed, the British authorities tried to coax Major Durga Malla into confessing the wrong and promised him grant of remission if he could do so. But it was against the wishes of Veer Durga Malla whose only objective was to get the country free. He preferred to embrace the gallows rather than accepting the proposal of the British rulers. All persuasions having failed, Durga Malla’s wife Smt. Sharda Devi was brought before him at the prison cell as the last resort. British authorities were of the opinion that she would persuade her husband to apologise. But Major Malla yielded to no devices of the British authorities. On the contrary, he gave his wife his last words by saying. Sharda, I am sacrificing my life for the freedom of my motherland. You need not be worried and distressed. Crores of Hindustanis will be with you after my death. The Sacrifice I am offering, shall not go in vain. India shall be free. I am confident, this is only a matter of time.

Supreme Sacrifice
On 15th August 1944, Veer Durga, the great patriot, was taken to Delhi Central Jail from the Red Fort. After ten days, on 25th August 1944, he was sent to the gallows. Thus ended the journey of one more noble son of mother India who laid down his precious life at the altar of Freedom. Durga Malla’s Physical body is no more but he sacrificed himself after leading a meaningful life of only 31 years and became immortal.